As you may have noticed, I'm an exceptinally well-read feline. And what could be better for a bibliophiliac like me than a whole store full of books? Well, I'll tell you what could be better: a book store that's home to a cat! So, here's one more of my guest cats: a smart young fellow named Mr. Eko. He hangs out at Dark Star Books in Yellow Springs, Ohio. The big cat image in the window is based on the previous resident cat, Bart, who ruled over his voluminous empire for some 17 years. 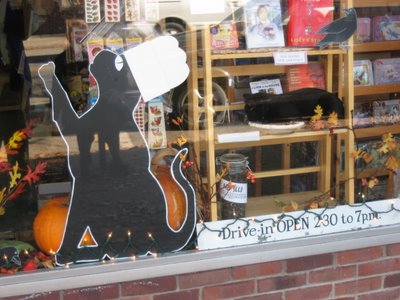 And here's a closup of young Mr. Eko, who has lived at the book store only since August, 2006. You'd be tuckered out, too, if you'd just consumed a whole Bird Pie. 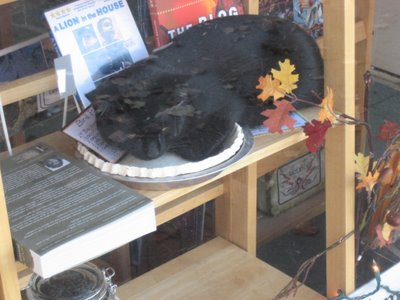 See more pictures of Mr. Eko, and of the beloved Bart, at the Dark Star Books website. More fabulous felines can be found at the Modulator's Friday Ark. And come back here on Sunday, December 3 for Catymology's Carnival of the Cats #141.

Matilda: cat of the year 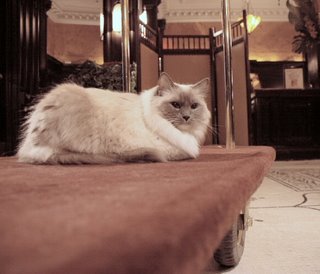 While most cats are self absorbed, some cats manage to rise above their natures. Matilda, cat in residence at the Algonquin Hotel in New York, is one of those special felines. On November 18, Matilda was named 2006 Cat of the Year at the Westchester Cat Show. According to the official press release, Matilda earned this honor by raising thousands of dollars for her less fortunate fellow felines by throwing herself birthday parties that benefit animal shelters and encourage pet adoptions.

In appreciation for this honor, Matilda donated a luxurious Algonquin Hotel suite, profits from show sales of the book The Algonquin Cat and all her prizes--a year's supply of cat food and a $500 pet shopping spree - to the North Shore Animal League, a no-kill animal adoption and rescue organization.

Congratulations to Matilda! You're an inspiration to all of us.

The part of Ohio where we spent Thanksgiving is a feline paradise. Whether you are an indoor puddy or a free-roaming feline, you will never lack for entertainment. 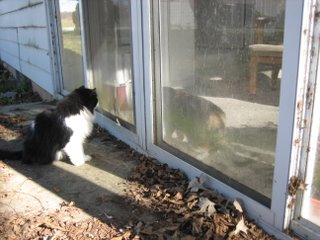 In the first photo, Tater, the queen of the barnyard, looks in on Trinket. Is she gloating because she gets to be outdoors in the sunshine?

Tater likes to trot down the road. Here, she's heading home after taking an afternoon walk with an assortment of humans. 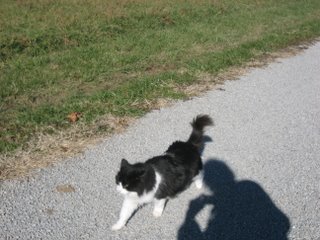 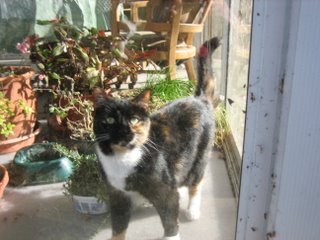 But don't feel sorry for Trinket. She has a glass-walled sun porch where she can catch a few rays and cozy up to some potted plants.

Catch more cats at the Carnival of the Cats, hosted this week by Scribblings. And don't forget that next week the Carnival will be here at Catymology.

Tater and Goldie show how to use machinery 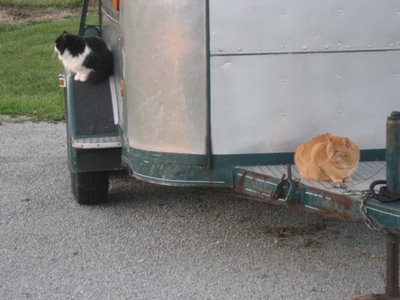 Tater, the black and white longhair, and Goldie have their own ideas about how to use a horse trailer.

Meanwhile, check out the Friday Ark at Modulator. 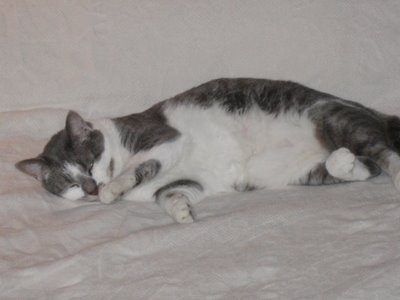 Here's Barny! My humans and I are spending a few days with Barny and his cohorts. Yesterday he showed us this resplendent white tummy.

See Lisaviolet 's blog for more links to kitty tummies. And come back later this week to see some of Barny's friends. 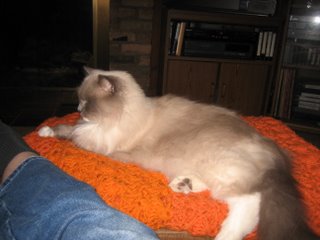 A poem for you:


Blessed are the catted.
May they never lack for entertainment
as long as they possess a piece of string.

Blessed are the catted,
May their homes be safe from mice.

Blessed are the catted,
May their ears ring with purrs.

Blessed are the catted.
May their clothes be forever furred.

Many cats and catted ones will gather at the Modulator's Friday Ark, and at this Sunday's Carnival of the Cats, hosted by Whole Kitten Kaboodle . Purrs! 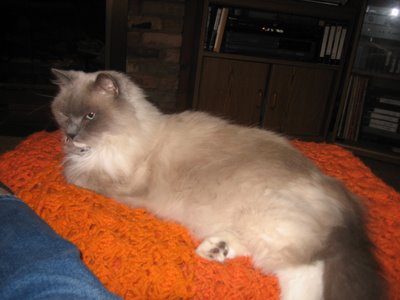 I am usually quite a mellow fellow, but I am forced to complain about the outrageous treatment to which I have been subjected during the past week by my humans. They refuse to let me roam about in my garden; instead they insist that I stay inside like a pampered lap cat, with nothing to amuse me but the occasional catnip mouse. They insist that "winter is come" and that opening and closing the door every five minutes to let me out would compromise homeland security. I say, it's their fault for choosing to live in such a cold climate.

It's true that a few days ago, I had a nice, tasty feather toy to play with. But that only lasted a few minutes. Feathers are such a delicious supplement to my diet, but one or two feathers don't make a bird. Yesterday they tried to appease me with a "tuna-flavored" treat, while they consumed Bluefin Tuna Steaks with Wasabi Mayonnaise. I turned up my nose and stalked off.

If this keeps up, I am going to have to write to the AFLU--the American Feline Liberation Union. Couldn't one of my catblogging friends from southern California or Hawaii give me a home for the winter?

I am posting this note to the Carnival of the Cats, hosted this week at Crazy Meezer. Wow, that blog is in Australia. Hey, Aussie cats; isn't it summer there? Please rescue me!

My last guest cat and dog were so popular that I've decided to make guests a regular feature.

Here's a Halloween picture of Barny, whose human comments: "Barny wanted me to show you how he helps [send a spell]. You can tell he's 'sending' when his eyes glow." 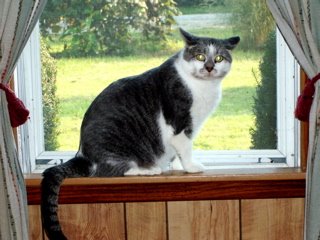 Barny lives in the country near Xenia, Ohio. His human found him by the side of the road when he was just a tiny kitten. She fed him with an eyedropper and took care of him. Now he helps out in the house, in the barn, and wherever else he's allowed to go. That would *not* include helping to care for the parrot, Pierre, who also shares the house.

Update: Barny has boarded the Friday Ark at Modulator.