Dr. Michael Fox, a holistic veterinarian, writes a nationally syndicated column called "Animal Doctor" on animal health and behavior. On his web site, he discusses the human-animal bond, the ethics of how humans treat animals, the treatment of wild animals, and many other topics. He even writes poetry! If your local newspaper doesn't carry his column, you can read samples and even get Dr. Fox's recipes for homemade dog and cat food.

Dr. Fox brings an international perspective to his work; he's currently working to help save elephants in India. In discussing the recall of dog and cat foods made by menu foods, Dr. Fox notes that there are organizations working to end tests on animals.

He refers us to The British Union for the Abolition of Vivisection (BUAV), one of the world's leading anti-vivisection campaigning organisations. The BUAV's vision is to create a world in which no one wants or believes we need to experiment on animals. The BUAV web site includes a list of some international pet food companies that do not test their foods on animals.

In which I become a famous feline poet

Amanuensis read some of my poetry at the Coffee Gallery in Minneapolis on Sunday. Of course, I couldn't go with her to the reading, because I hate traveling outside my back yard, and because they don't allow cats in restaurants here. But she came home and told me all about it. Apparently, the other humans thought my work was pretty amusing. Whatever!

Here are some of the poems she read:

The Four Subjects of Catblogging

A Pear-Shaped Cat Sings the Blues

The only thing that was more fun than hearing about the reading was that when she got home, I went outside and played in the garden. The white stuff is gone! 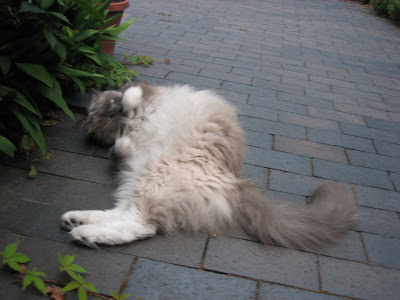 More playful critters are boarding the Friday Ark! On Sunday, the Carnival of the Cats lands at IMAO, where everyone is "Unfair. Unbalanced. Unmedicated." Oh, boy. maybe we'll get a postcard from Darcy in time to enter. It sounds like his kind of gig.

My poem on the Vernal Equinox may have been a dream, but yesterday, my dream came true. 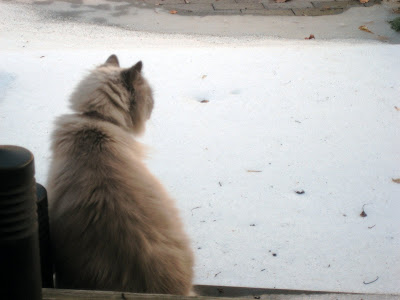 It certainly wasn't an easy journey. The sheet of ice was cold and wet. 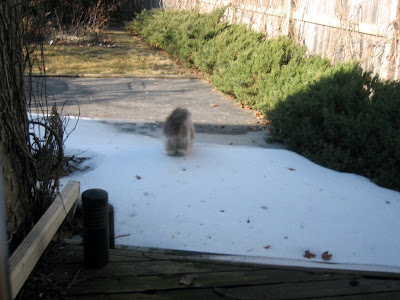 But in the end, I made it out to the dry, sunny patio. 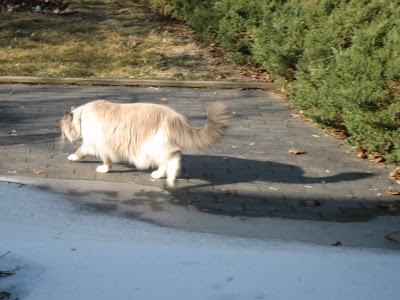 I am still a fool for Spring!


Don't forget the join in the Carnival of the Cats tomorrow at Scribblings. 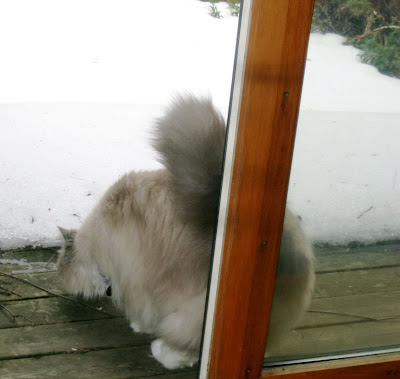 Birds sing, but no green in my garden
We’ll have to wait for thunderstorms
To wash away the snow drifts


A hard rain would be good 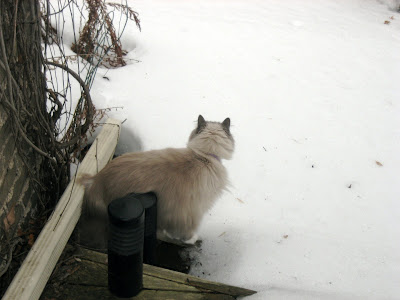 I turn my face toward the light 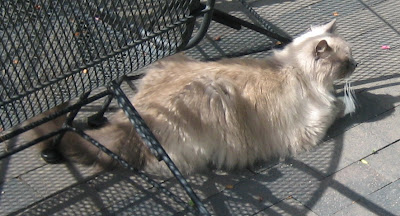 Did I hear a bird? Is there any green?
No, it was false
I am a fool for Spring

The Vernal Equinox takes place today at 7:07 p.m CST. Honor your sunloving felines by submitting your links to the Friday Ark and also to the Carnival of the Cats, hosted this week by Scribblings.

Lord of the Pounce

I was not named Aloysius Pangur Ban for nothing. Pangur Ban, the famous poem about a scholar and his cat, describes me to a T. At least one day a year, I celebrate my Irish heritage. This Saint Patrick's Day, I'm going to lay around all day, exposing my furry tummy, while listening to some good old-time Irish music. 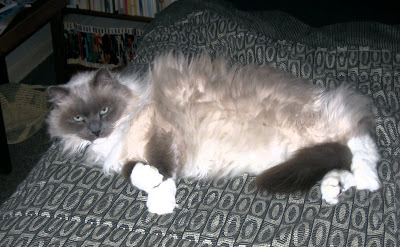 Here's one tune I recently discovered: Lord of the Pounce, a variation on the Lord of the Dance. A bard named Marc Gunn wrote the lyrics:

And then he recorded them along with several other Irish cat songs; now you can buy the CD or download the song for free.

Marc Gunn is an Irish and Scottish folk singer with a strange affinity for Celtic ballads, drinking songs and cats. He is the lead singer for the Brobdingnagian Bards, an internet music promoter, podcaster, poet, photographer and publisher of many, many things on and offline.

And just this week, Marc's band, the Brobdingnagian Bards, won an award:

AUSTIN, TX (March 15, 2007) - Indie Celtic music favorites the Brobdingnagian Bards were named Best "None of the Above" Band of 2006-07 at the prestigious Austin Music Awards held last night at the Austin Convention Center, kicking off the music portion of the international South By Southwest music conference. 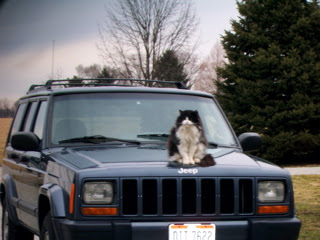 If you can't afford a Jaguar, how about your own feline hood ornament? Here's Tater, one of the Ohio cats, dressing up a Jeep with perfect cat conformation. Is she a leaper or a growler? I'd say she was more of a purrer.

First, there was the tuna! 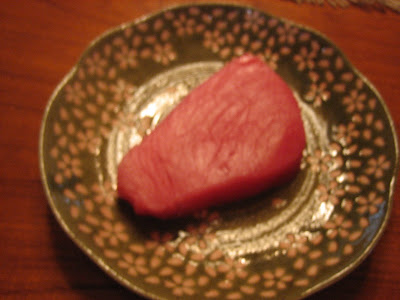 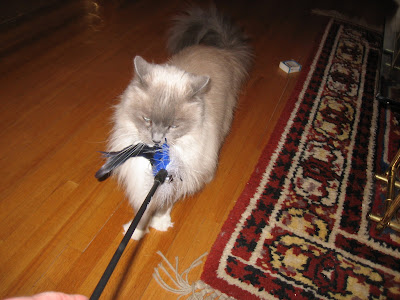 And to top it all off, birthday greetings from the Carnival of the Cats:

"No award is greater than celebrating a cat's birthday. Especially when gifts are involved."

Thanks to all the cats and catted ones who sent birthday greetings. I've got to take a nap.
Now! 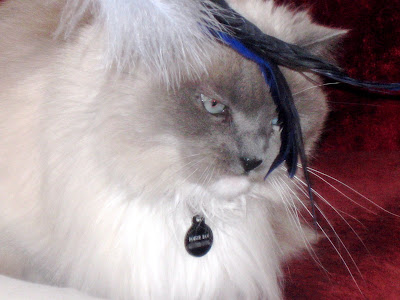 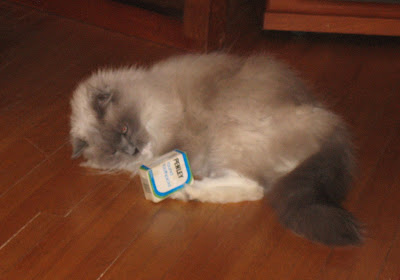 They say a cat's got to drop a hint if he wants a nice toy for his birthday. Well, my official birthday is tomorrow, March 9. I discovered last year that March 9 is also the birthday of Saint Aloysius Gonzaga. Being a pious cat myself--after all, I invented the Church of Catymology, which celebrates the feline in us all--I realized at once that my birthday should be celebrated on March 9.

Well, ahem. What are you going to get me for my birthday? I mean, I can't go on playing with this empty toothpick box forever. In case you're having trouble, here are some suggestions.

In "My Name is Buddy": Ry Cooder Rules!

Yo, cats and catted ones!

You may have thought from last week's scurrilous journalistic travesty about my "rehab" that I wouldn't be posting much more for a while. Well, you were wrong. Actually, I am at a wonderful resort, the Feline Association Recreation Center (FARC), and NOT as previously reported, the Factual Recovery Analysis Center (FRAC). (Human journalists are so easily duped by acronyms.)

Some of the greatest cats and catted ones frequent Feline Association Recreation Center. Already I've met the great bluesman, Ry Cooder, who is currently touring Europe. Cooder stopped by to play a set from his hot new album, My Name is Buddy, which has just been released on Nonesuch Records.

Cooder’s an oldtime hot bluesman. He's the guy who wrote soundtracks for movies like Paris, Texas, and got together the music for The Buena Vista Social Club. Just when you think this cat has been everywhere, done everything, well, I gotta tell you, in My Name is Buddy, Cooder goes where no bluesman has gone before. His hero, Buddy, is a Red Cat. Literally. (As a Redpoint Siamese, I feel a natural kinship.)

In between songs, Cooder explained that Buddy was inspired by a mysterious photo sent to him of a cat's head grafted onto Lead Belly's body. The album tells the story of a cat who travels and sees the world in the bygone era of miner’s strikes, big, bad bosses, and farm failures. Buddy, the Red Cat, is every working man. Cooder says "He's a red cat - not just red colored - but he's a union man. He becomes Red." Or as Buddy sings, "I'm a red cat til I die..."


Buddy stands up for other species too, not just downtrodden humans, but a mouse named Lefty and the Reverend Tom Toad. Now that's a program I can get behind. Make no mistake, Buddy's story may be set in the past, but it's really about stuff that's going on today. And if that's not enough, the album includes a booklet with Cooder’s backstories about Buddy, with illustrations by Victor Valdez.

You can get a taste of Cooder's style over at the I-Tunes Store, or wherever else you preview your music. Be sure to check out this tune: “One Cat, One Vote, One Beer.” Or this one: "There's a Bright Side Somewhere." Cause after all these years, Ry Cooder still hopes that maybe humans can dig themselves out of the hole they've made for themselves. And if Buddy Red Cat ain't our hero, who is?

Artsy Catsy: "And we must put the 'fun' back in dysfunctional and learn to all just cat along."

It seems there's been a brouhaha over a little contest that Zeus held--all in fun--but some grumpy cats didn't get the joke. Follow the links and show your support for Zeus, Skeezix and Beau.

March came in like the proverbial lion, dumping a foot of snow on my back yard. 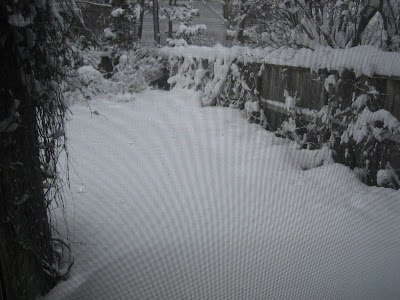 I'm just going to sit here on this nice cushy couch until the white lion melts away. 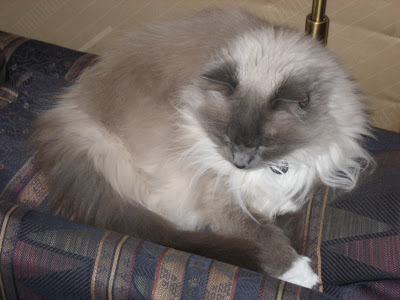 Or maybe I'll get up and play with my finger puppet toy. 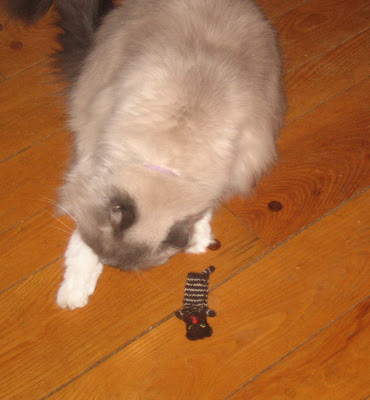 I'll surely find time to check out what the other critters are up to at Modulator's Friday Ark. On Sunday, I'll stroll on over to the Carnival of the Cats, hosted this week by Mycah at Tacjammer.

A furry carnival of satire

Mark A. Rayner's Carnival of Satire #68 is chock full of furry goodness, including a posts about Darcy and one that Professor Katz found on Language Log. Oh, and our San Diego friend, KT Cat, has an entry too.

And don't we wish that we were in San Diego today? March is coming in like the proverbial lion. Tune in later for some blizzard pics.