Since I've been going outside and chasing leaves around the garden, I've been going through a lot of cat food. Fortunately, my humans keep my bowl well filled. But many cats aren't that lucky. 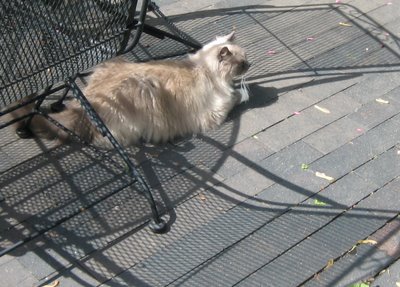 Residents of Catymology Central have been following the sad story of the tiger that killed his keeper. Yesterday, a University of Minnesota veterinarian confirmed that the tiger had been starving.

The male tiger, named Tango, mauled and killed Cynthia Gamble, 52, at her property east of Sandstone on April 6. A friend found her body inside the tiger's cage near her residence.

The report said the tiger was "cachetic," meaning it was emaciated. It weighed about 260 pounds, far less than normal weight for a Bengal tiger, said Dr. Arnold Wuenschmann, the veterinarian who examined the tiger.

"I can say that he didn't eat enough," said Wuenschmann, who estimated that the 10-year-old tiger should have weighed up to 150 pounds more.

Gamble owned the Center for Endangered Cats and was licensed by the USDA to keep and show the tigers. She filed for Chapter 7 bankruptcy in 2004. Two other tigers on the property were also underweight and have been moved to an animal refuge, the Wildcat Sanctuary. The only possible conclusion is that Tango was abused. Hungry cats, whether big or little, are dangerous. Tango was destroyed.

Keith Streff, an investigator for the Hennepin County Humane Society, said he'd received "calls of concern" about Gamble's operation in the past but said that he couldn't recall any animal welfare problems.

But PETA called for a ban on keeping big cats, except in accredited zoos and sanctuaries. Gamble was licensed as an exhibitor by the USDA, but she was not accredited by the American Zoo and Aquarium Association or the Association of Sanctuaries. The PETA press release goes on:

USDA exhibitor's licenses are easy to obtain, making the current state law, which bars people from owning exotic animals unless they have a USDA license, a "paper tiger."

The Wildcat Sanctuary was in the news last month, when a tiger named Meme succumbed to cancer. Meme, pictured at right, had lived there since 2001, but township officials were threatening to close the sanctuary down because local laws did not allow big cats, like tigers and lions. The Wildcat Sanctuary has since announced plans to expand their operation and move to Sandstone.

If you care about animal welfare, donate to your local no-kill shelter, or to an animal refuge such as The Wildcat Sanctuary. The Wildcat Sanctuary is accredited by both the Amerian Sanctuary Association and The Asssociation of Sanctuaries and does not buy, sell, or breed animals. It is not even open to the public, because its mission is to care for abused and abandoned cats, not to entertain the public. It's all about the cats!

Tigers and other species take refuge on the Friday Ark at Modulator. This Sunday, the Carnival of the Cats features yours truly at Begin Each Day as if it were on purpose.

I agree with Mordwyn. In my feline opinion, what would have been so hard about moving Tango to a different place as well? Why do two wrongs make a right to homo sapiens?

The animal has no idea it killed a human. There was no guarantee it would kill another one. With some tiger breeds being endangered, I just find it sad that my feline cousins are reduced to such a state.