How DO you mew? 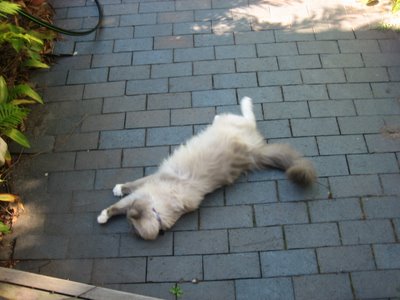 Does how you mew depend on where you live? Here at Catymology Central, everyone's buzzing rolling over laughing about this story we heard on BBC NEWS | UK | Cows also 'have regional accents':

Cows have regional accents like humans, language specialists have suggested.

They decided to examine the issue after dairy farmers noticed their cows had slightly different moos, depending on which herd they came from.

John Wells, Professor of Phonetics at the University of London, said regional twangs had been seen before in birds.

The farmers in Somerset who noticed the phenomenon said it may have been the result of the close bond between them and their animals.

Farmer Lloyd Green, from Glastonbury, said: "I spend a lot of time with my ones and they definitely moo with a Somerset drawl."

Interesting, no? Do Boston cats say "Meow-er?" Do Chicago cats go "Mow?" How do they meow in Singapore, Sydney, Brussels, Nassau, and Dusseldorf? What about Dublin, Toronto, and Ankara? Since blogging cats live all over the world, I'm asking all you cats and catted ones to send me examples of how your mew, meow, or murr is influenced by where--and with whom--you dwell.

Leave a comment-- or post your opinion on your catblog and send it in to this Sunday's Carnival of the Cats, which, conveniently, will be right here at Catymology. Send all entries to submissions (at) carnivalofthecats.com or use Ferdy's carnival submission form. And don't forget the Friday Ark at the Modulator.

Update: The good linguists at Language Log have documented that the whole issue of cows mooing in regional dialects was “created out of nothing as a PR stunt” on behalf of a West Country cheese maker. It was fun while it lasted!