But no one is smarter than Aloysius Katz. 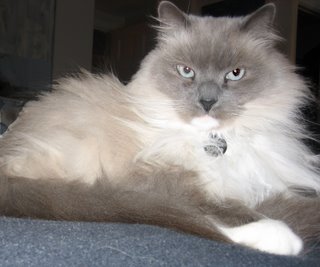 Redbook Magazine says: "Research shows that kids who grow up with animals have more self-esteem, higher IQs and better emotional health as adults."

Later in the article, though, it's stated that parents should wait till the child is 5 before adopting a pet. That's because a kid might accidentally harm the pet. Amanuensis recalls that her rowdy cousin Brad, who was 2 or 3 at the time, once tried to stuff her cat in a drawer. It wasn't an accident at all. Neither was the scratching that Brad endured.

Amanuensis, who was catted from birth, says cats definitely made her smarter. She learned quite early to respect the claws. In fact, she wishes that I still had my front claws. If I did, I'd probably be able to climb over that darn backyard fence and stroll over to visit the neightborhood calico cutie.

I can vouch for the fact that amanuensis is smart; otherwise, she wouldn't be able to keep up with me. But the verdict on her mental health is not yet in.

Visit the Friday Ark at Modulator for lots more about pets and how they keep their humans sane.
On Sunday, Carnival of the Cats raises its tent at My Animal Family.

My human pet does not have children yet, but when she decides to pursue them, I plan on teaching them a thing or two!