A zebra mussel with name tags 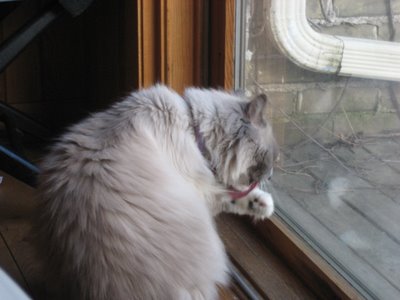 I almost bit my tongue when I heard that domestic cats like me have been charged with being unwanted aliens.

Though not legally classified as such, the domestic free-ranging cat is actually a harmful exotic species, like a zebra mussel with name tags.

The report, from the Minnesota Department of Natural Resources, goes on to document that cats kill millions of wild birds every year. We're just following our instincts, but sometimes instincts get you in trouble.

Last week, amanuensis discovered a cardinal's nest in the vines on the side of the house, directly above the back door. This is the same door that I sit longingly in front of 24/7, until someone takes pity on me and lets me out in the garden. 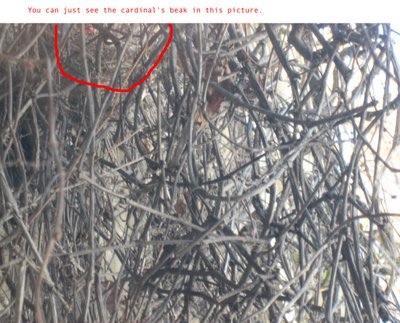 Now I've been informed that as soon as the baby birds hatch, I am going to be grounded--or at least heavily supervised--until they're old enough to fly away. In compensation, I've negotiated a subscription to the online version of Birds of North America and extra brushing. It's not as satisfying as sinking my teeth into a little ball of feathers, but it will have to do.

Consistency is not one of my major virtues. And thinking about the welfare of others is a bit of a stretch. But the fact is, if I were a baby cardinal, I wouldn't put up with me stalking around my playpen. That sounds strange, doesn't it? But you know what I mean.

Fur and feathers fly at Modulator's Friday Ark. On Sunday, see what all the other cats are up to when Furry Paws hosts the Carnival of the Cats.