A tuna in any language is still a fish 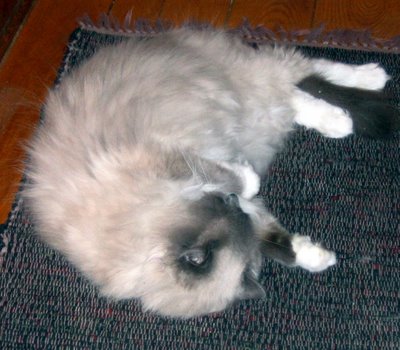 I don’t care what language you sing in as long as you bring treats.

Humans have gone all fur up and claws out over the Spanish language translation of the Star-Spangled Banner that was released last week. What's all the caterwauling about? Amanuensis hunted down the fact that translations of the American humans' national anthem have been published in

Our friend Darcy X., who recently announced his intention to hang out in Maui for a while, promised to research a Hawaiian version for us.

Speaking of caterwauling, the tune for The Star-Spangled Banner comes from an old drinking song that begins:

A fig for parnassus...

Please, keep the figs and give me some Ahi, Thunfisch, bonito, tonno, thon, tunffisch, tyheu, maguro . . .

See what all the other cats are up to at Friday Ark. On Sunday, the Carnival of the Cats will be at Pages Turned

One of our TV news teams did an on-line survey and I was surprised that the majority of respondents thought the Spanish version was "unpatriotic." (This is Arkansas -- I shouldn't be surprised.) I fail to see why. I wonder if our national anthem means more to some immigrants than is does to some other Americans -- the ones I see sitting there, drinking their beers, smoking and wearing their hats during the anthem at outdoor events.

I found the Samoan text while trying (and failing) to find one in Hawaiian. I hope Darcy finds something.

Darcy has to get himself over to the University of Hawaii on the main island. Apparently they have a CD there by Patricius Dickson , who sings the anthem in Hawaiian. Unfortunately the CD is out of print.

Aloysius,
What kind of kitty are you? I think you are my kind of kitty. Well, my sister's kind too. Your fur is very lovely.
Sincerely,
Nicky