My buddy Jack and I went out on the town in the Big Apple, and this is what we saw:

First, we saw a whole lotta Dada at the place called MoMA. That's a big house full of people --and art! Here are some of the people milling around waiting to get in. 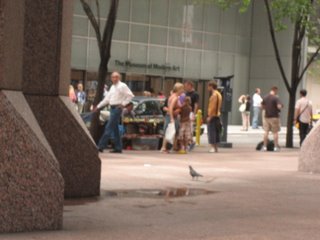 Dada turns out to be right up my alley. It took me a while to understand it, though. I had to give Professor Katz a call. Katz said: "Dada is art and not art at the same time."

What d'ya mean by that, Katz? I mean, how can something be and not be art?

Think of it in terms of Heisenberg's uncertainty principle.

It's a scientific theory. You could look it up.

No, Katz. Not me. That looking stuff up is what you do on your thingpoddy. I'm here to get the gist of life, not look it up, you get me?

Dada strove to have no meaning — interpretation of Dada is dependent entirely on the viewer.

So, Katz got on his thingpoddy and looked up some more about Dada.

A reviewer from the American Art News stated that "The Dada philosophy is the sickest, most paralyzing and most destructive thing that has ever originated from the brain of man."

That's great, Katz. This Dada is right up my alley.

Art historians have described Dada as being, in large part, "in reaction to what many of these artists saw as nothing more than an insane spectacle of collective homicide."

The Dada movement was a reaction to the First World War.

Not that there aren't a pile of wars going on right now. I mean, I can't help but see it on the television, even if I don't read the paper.

Katz agreed with me about that, and even Ol' One-eye Jack went "Merrow." I think he meant to say that Dada is right up his alley, too. But by this time, Ol' Jack was under the table. 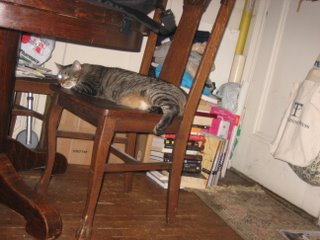 Dada was "a revolt against a world that was capable of unspeakable horrors. Reason and logic had led people into the horrors of war; the only route to salvation was to reject logic and embrace anarchy and the irrational."

No, Katz, Dada ain't over. Dada lives. And a lot of the humans I saw looking at the Dada, most of them pretty young from the looks of them, seemed to agree with me. They were all over Dada like ants on honey.

I was really pumped about seeing all the Dada. In fact, after seeing that show, I couldn't stop seeing Dada. Dada is everywhere. Want a couple of examples?

One heck of a humongous Gato! Right on the sidewalk! Looks like Dada to me. 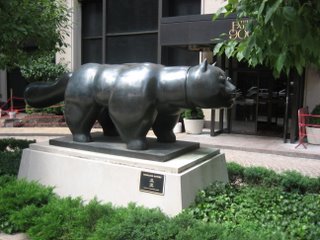 And here's a Dada souvenir I bought for Katz. 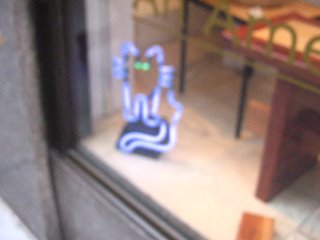 But I gotta let Katz have the last word here:

According to Tristan Tzara, "God and my toothbrush are Dada, and New Yorkers can be Dada too, if they are not already."

Ain't that the truth?