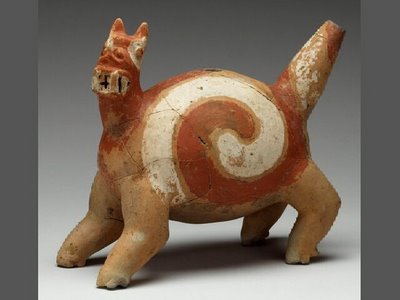 Yesterday my humans visited the Minneapolis Institute of Arts. I couldn't go with them, of course, as they don't allow pets in the museum. But amanuensis did send me this souvenir image of a fabulous Underwater Panther. This being is a relative of Missipeshu, about whom I posted here and here. This panther is made out of clay and is said to be over 500 years old; it was found in the modern-day state of Arkansas. Here's what it says in the online catalogue:

The prominent colored swirls and eye motifs mark this animal as an Underwater Panther, one of the primary beings in the ancient Mississippian belief system and that of their descendants. The swirling pattern on its sides signifies water, while the eye markings allude to the animal's unusually keen vision. Red and white were symbolically significant colors that represented fundamental oppositions such as peace and war, light and dark and the on-going struggle between the celestial and subterranean realms. Underwater Panthers belonged to the subterranean and possessed great supernatural power. Their significance led Mississippian and subsequent artists to depict them frequently in many forms and media, including three-dimensional sculptures like this vessel.

Now that I know about the Minneapolis Institute of Arts, I'm going to go check out some of the other fabulous felines in their collection.

Visit all the fabolous felines at this Sunday's Carnival of the Cats #128, hosted by Watermark.