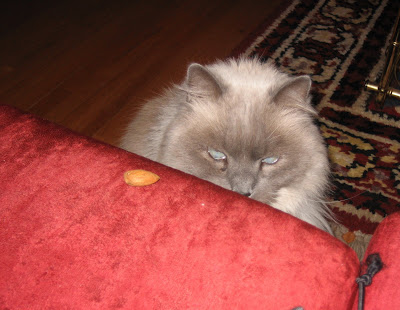 Which would you rather have--a football or a nut? I've been stalking this cute little item for a couple of days now, and I think I've just about got it trapped.

Me, I'm not so crazy about the game called football. But I know a lot of humans go nuts over football, in the USA. (There's another game called football, of course, in the rest of the world.) World football, soccer to you US humans, might be the better game for cats, since it's played with the feet. See, cats have four feet, no opposable thumbs. So soccer suits us better.

I am, however, willing to live and let live when humans want to watch some football. Just make sure that you videotape the "Puppy Bowl" for your feline and canine friends, with special attention to the halftime Bissell Kitty Half Time Show. You can see some previous action over on the Animal Planet website. Tons of adorable kittens playing football!

More playful creatures will congregate at the Friday Ark tomorrow. On Sunday, play along with Laurence Simon as he hosts the Superbowl of Catblogging, a special edition of the Carnival of the Cats. By the way, it seems like the Carnival is in need of future hosts. Why not sign up?