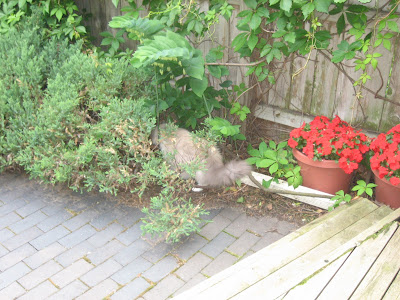 I crept back behind the juniper bushes. I like to sit there, where I'm mostly hidden by the foliage, and wait for prey. Usually, nothing comes by. But today was different: a fat little chipmunk ran right up to my mouth. I opened my jaws and caught it behind the neck! Seconds later, I was at the sliding door, asking to come in, with a joyous "Meow!"

Look what I brought you, you lazy humans!

Amanuensis yelled, "Oh, God, he's got a bird!" But by this time I was already in the house, dangling my prize like a mother cat carrying her newborn kitten.

"No, it's a chipmunk," she yelled. "Drop that this minute. Aloysius, drop it!"

I opened my mouth, and the chipmunk scurried away to hide among the potted plants. Next thing I knew, I was being picked up and locked in the kitchen. The indignity of it!

Note from amanuensis: we propped the side door open and, with a broom, shooed the chipmunk outside. No, we were not going to stop long enough to take its picture. The chipmunk looked pretty frisky. It ran out the door and disappeared into the bushes. Aloysius had probably not even broken the skin on the back of its neck. He just wanted us to share his toy!

Aloysius: I can has chipmunk! Weekend Cat Blogging is at CatSynth--a very interesting blog that is new to us!