Where in the world would a pear-shaped cat sit? 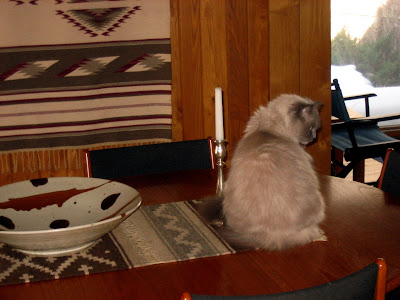 Where in the world would a pear-shaped cat sit?
On a runner, on a table, near a pot by Warren MacKenzie
One of the most influential potters of the last 50 years, MacKenzie has taught countless students at the University of Minnesota and has influenced many more to produce beautiful, simple, functional pottery. His pots, in their beauty and simplicity of line, are not unlike the beauty and simplicity of a pear-shaped cat.

Do check in on the Friday Ark at Modulator tomorrow. On March 16, the Carnival of the Cats lands at This, That & The Other Thing.

P.S. Yes, I meant to repeat simple, simplicity, simplicity. Repetition is the soul of art--but that's a subject for another post.