I have trouble with posting emails in Netflix. What about this? 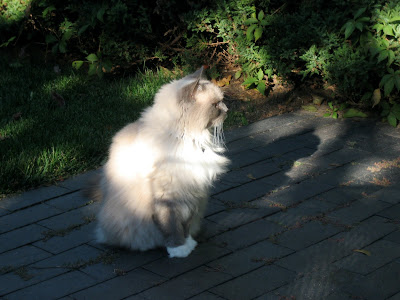 Dear friends,
I am sad to have to tell you that Aloysius passed away on Friday, September 9, 2011. He had been healthy up until this summer, but then was diagnosed with kidney failure. Still, he survived for a few weeks, and was able to prowl about and chase chipmunks in his garden. We miss him very much. I know he would have loved to have heard the greetings that he has already received today, which many of you were kind enough to post under last year's Gotcha day item.
# posted by amanuensis @ 1:23 PM |


I've been ruling the house here for eight years now, and I have never stopped learning how to surprise my humans. Most recently, I learned how to get over the fence. All I have to do is get up in that tree, and I can go catting around down the block. 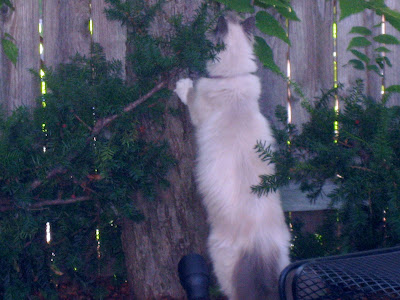 I was able to get up there--despite the fact that my previous human had me declawed. I used the lawn furniture as a ladder. 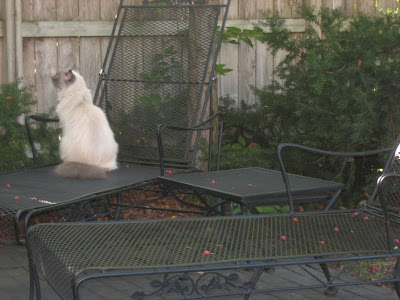 But now they've moved the lounge chair further from the tree, and I can't get into the tree any more. Rats! I guess I will have to stay here, but only if they give me some extra sliced turkey and catnip.

P.S. Thanks to all the cats and catted ones who've already wished me a happy Gotcha Day.

Cuter than a cupcake 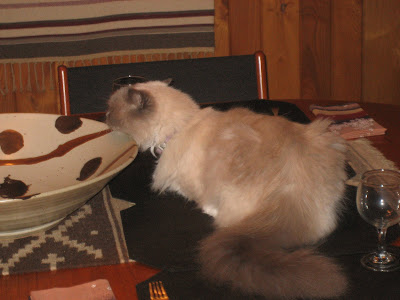 My human picked up a back issue of Vanity Fair because she wanted to read a piece called "Addicted to Cute." Doesn't she know that I am the king of cuteness?

I am the cutest thing since sliced mousie paws.

I am the cutest kitty ever to loll on the dining room table.

Cuter than a cupcake, thanks very much.

But if you're making cupcakes, make mine with tuna, won't you?

It's my birthday, and I'll be cute if I want to! 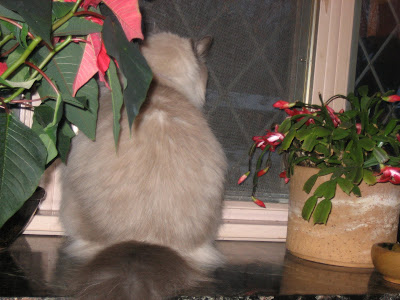 Later, they’ll go to bed and dream
Of peace for earth and all its creatures
While I keep watch throughout the night
My eyes refracting paradise.

Blessings be to all critters and their humans!

Into the litter box: vacations & catnip 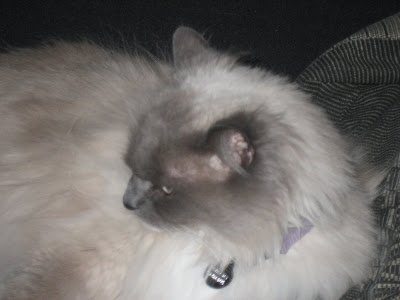 After the sad news from last week, I needed a laugh. Fortunately, some humans just keep sending me LOL messages, like this one. This guy doesn't need a vacation; he needs a copy editor.

No matter how old your cat is, it is never too late to ensure that he is comfortable and that you are doing everything you can to maximize his health.

After all, your cat is your companion and you want the best for him.

What can you do?

Here are a few things:
• Make sure your cat has regular vet visits. Pets age much faster than we do and an annual exam can help identify significant problems early on.

• Ensure your cat has all vacations. It's best to prevent problems rather than treat them.

Speaking of vacations, some politicians need to take one. I just received a missive from James Carville:

As President Obama recently said, conflict is like catnip. The right-wing media scurries over to it. They sniff at it. They bat it back and forth. They roll in it. They. Just. Can't. Get. Enough.

They're masters of manipulation.

That's catnip for you: addictive. But otherwise, catnip is not like conflict. Catnip is more like mmm--the way humans describe a nice glass of single-malt scotch, or a really mellow reefer. Catnip is more like taking a vacation without ever having to leave home. In short, if conflict really were catnip, politicians would all be too blissed out to get worked up about it. And they'd take more vacations, thus preventing problems rather than creating them.

Where have all the chipmunks gone? 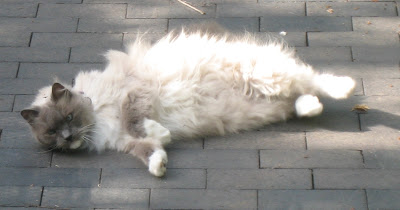 Alas, I'm all alone on the patio. Where have all my chipmunks gone? 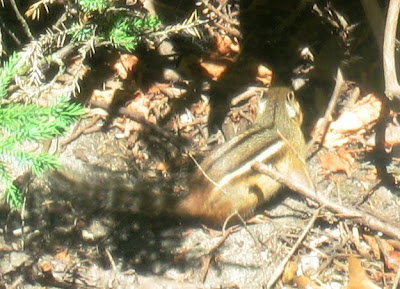 Earlier this summer, my backyard was full of the little rodents. I would chase them and chase them all the time--although I never caught one. Then, a couple of weeks ago, they all disappeared. My humans found a dead chipmunk on the grass, and they thought that I had done it in. But I didn't.

Yesterday, the next-door neighbor told my humans that she had called in an exterminator to rid her house of mice. Of course the exterminator put poison both inside and outside the house. That's when she said that she had found a dead chipmunk in the yard. The chipmunks must have all eaten the tasty poison, because they're gone.

I loved chasing my chipmunks. I wrote a poem about them--Timber Tiger, the slang name for chipmunks in parts of the Pacific Northwest. Even if I could have caught one, I never would have killed them all. I miss my Timber Tigers very much.

My timber tigers will be remembered on the Friday Ark, and in the Carnival of the Cats, hosted this week by House Panthers.