Why cats are much better than dogs, part 3

It goes without saying that cats are conservative. Ferdinand T. Cat, a.k.a The Conservative Cat, posted a link to a joke about giving pills to cats and dogs. I laughed so hard I almost hacked up a hairball.

More about cats and dogs.

"A cat's purr is a gentle snore." I heard this remarkably sonorous sentence on National Public Radio's Science Friday broadcast of the Ig Nobel Awards, November 25, 2005.

The theme of the 15th First Annual Ig Nobel Awards was "Infinity." Speaking of that theme, I recommend an amusing web site called The Infinite Cat Project.

Hard-boiled cat with a heart of gold

In this purrfectly delicious illustrated short story, Midnight Louie and his inamorata, the Divine Yvette, travel to the New England seaside town of Innsmouth to star in a cat food commercial. What’s fishy is the town itself: it’s caught in the slimy paws of a legendary monster named Cthulhu. Cthulhu is a monster-god who figures in a number of classic works by H. P. Lovecraft. The Egyptian cat god Bastet also has a cameo in Something Fishy.

The every-resourceful Louie, a twenty-pound black Tom of uncertain parentage, has been solving mysteries for many years now, mostly in his home turf of Las Vegas. With his handsome physique, his hardboiled demeanor, and his ironic view of humankind, Louie is the Bruce Willis of cats. No stranger to the streets, he's easily distracted by the smell of fish--as well as by the delicious Yvette. Yvette, a diminutive pedigreed Persian whose silver fur and sea-green eyes bewitch the lovesick Louie, turns out to have hidden talents—and she knows how to use them.

Louie shares Lovecraft’s taste for horror, but writes in his own, inimitable style. I lapped up Louie’s description of the moonlight on the sea “like a great purring shaded silver Persian cat.”

Louie’s amanuensis, Carole Nelson Douglas, is clearly one of the blessed among the catted.

Blessed are the catted.
May they never lack for entertainment
as long as they possess a piece of string.

Blessed are the catted,
May their homes be safe from mice.

Blessed are the catted,
May their ears ring with purrs.

Blessed are the catted.
May their clothes be forever furred. 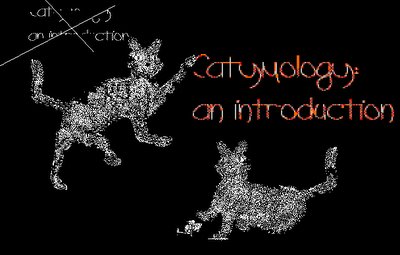 Aloysius vs. Aloyisius
And how do I pronounce my name?

Controversy over how to spell and pronounce my name has littered the World Wide Web, spreading confusion and leading to countless amusing exchanges among the catymologically challenged.

If one googles Aloyisius, Google asks, “Did you mean Aloysius?”
This morning, Google coughed up only 789 hits for Aloyisius.
For Aloysius, however, Google spat out 4,270,000 hits!

Therefore, I’m sticking with my name.
Aloysius is my name.

Even more prevalent than spelling errors, mistakes in pronunciation have dogged those lucky enough to be named Aloysius :

al-OY-see-us? Please! This poor, dogged human must have wasted his youth on too much Latin.

For, while Aloysius is a Catholic saint, good Irish folks—Catholic and otherwise—usually pronounce his name as follows:

Katherine Dunn, author of Geek Love, shows a fine ear for catymology when she comments:

The Family Names:
Sometimes naming fictional characters is a lot like naming real babies. You come up with a name before you know much about them as individuals. You pick a name that represents an idea of what you want them to be.

I wanted the carnival family to be a classic all-American mix, rootless originals spliced into something new. The name Binewski was part of a rhyming pet name my mother used to call us kids when we were growing up. “Now, my little Rooski Binooski,” she’d say. It has a nice middle-European rhythm. Aloysius (which I pronounce “allo-wishes”) is a stereotypical Irish name. Lillian Hinchcliff is the snooty WASP/English contingent. The children have Greek or Italian names, partly to suggest a kind of ostentation by the parents, and partly for the lyric bombast native to the show world of carnivals and circuses.

By 1986, Costello was preparing to make a comeback. Working in the US with Burnett, a band containing a number of Elvis Presley's sidemen (including James Burton and Jerry Scheff) and minor input from the Attractions he produced King Of America, an acoustic guitar-driven album with a country sound, augmented by some of his best songs for some time. Around this time he legally changed his name back to Declan MacManus, adding Aloysius as an extra middle name.

Some find my name elegant—as in the following except from a bio of an Irish radio personality:

Christened Aloysius, his shortened version, Weeshie, came about when his young pals in lower New Street Killarney of the 40's and 50's failed to pronounce what he terms the "posh" Aloysius.

Please don’t call me Weeshie! I’m much too POSH for that.

Theater folks, who after all have to speak up, have sometimes wondered how to pronounce the name of a character called Aloysius:

I'm preparing one of Father Flynn's monologues for an audition and he mentions her name. I've read the play, but not seen it, so I've never heard Sister Aloysius' name pronounced. I'm guessing it's "ah-LOY-shus" but I'm not sure. Can anyone help me out here? Thanks.

Believe it or not, I have relatives with that old Irish name. They pronounce it Al - Oh - wishus (that last is like 'wishes' with a u instead of an e)

Or Al-oh-wish-us. It's the name of the teddy bear in "Brideshead Revisited", too.

if you have access to the movie It's a mad mad mad mad world, i know they emphasize that name in there somewhere...(i'm an auditory learner hahahaha)

OK--thanks everyone. Glad I asked! I definitely would have said it wrong.

That's it EganFan. Emphasis is on the 'wish'.

"Always forgive your enemies; nothing annoys them so much." --Oscar Wilde