A letter from Matilda 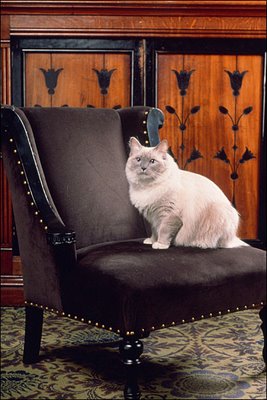 I am so excited! I just received this charming response from the beautiful Matilda, who lives at the Algonquin Hotel in New York:

You are CATabulously lovely - and guess what - because of the article I just
discovered my birth human and .... I am really a Ragdoll - so you may be one
too !!!!! You should look us up on ragdollcat.org.

You are right - I am getting a lot of fan mail after the article and my paws
are starting to hurt from all the typing. Can you come over here and help
me?!

I would be CATegorically delighted to be on your website.

It turns out that Matilda has gotten a lot more PR, too. No wonder she is so busy. People even tell her their secrets in emails. Like me, Matilda has staff: Alice de Almeida, the hotel manager's Executive Assistant.

The web site Shopcat tells us more and has some gorgeous pictures of Matilda. And this site says that she's a Ragdoll, not a Birman.

Matilda shares a rich history with many other kitties. Since the late 1930s, there has always been a shopcat at the Algonquin Hotel. Each cat has been "stage-named" Hamlet, but they all have personal names as well. All the other cats who lived at the Algonquin have been mutts, picked up from local shelters. Matilda is the first purebred cat the Algonquin has ever had (she is a Ragdoll). She has been at the Algonquin since 1997 when she was 2 years old. They have birthday parties for her every July 10. At her July 10, 2000 party, they raised $5000 for cat charities. Many cats were invited, but she didn't like any of them. She is very soft but doesn't like to be picked up. Her favorite hobbies are monitoring the desk, sniffing luggage, getting chin rubs, and bathing herself frequently.

I'll be following Matilda's adventures in the future; this November she's to be "Cat of the Year" at the Westchester Cat Show.