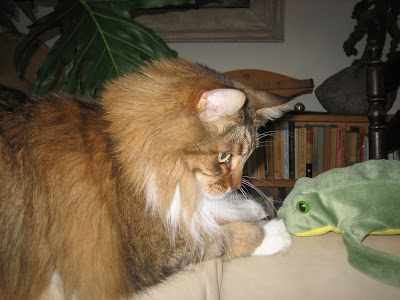 Even the most intrepid feline reporter sometimes needs a fact checker. Our latest guest cat got his human to send in this correction, and another fascinating story about the origin of the Maine Coon breed.

It's Machias or Chai, for short. If you look on your map you'll see Machias and Machias Port in northern Maine. Maybe you will also be interested in this legend passed down to us about Maine coons:

The Maine Coon--the legacy of Queen Marie Antoinette. Before France's Queen Marie Antoinette had here ill-fated run-in with the guillotine, she had acquired several long-haired Angora cats from Turkey. According to legend, her prized pets were to be sent ahead, to French Canada, along with other personal items, as she and King Louis XVI prepared to flee from the French Revolutionaries. Unfortunately, only her belongings escaped. As her cargo ship neared the American coast of Maine, its Captain--fearful of the consequences he would receive for transporting the Queen's valuables--dumped the royal cargo over the side and released the cats on the nearest shore. Unknowingly he had introduced an entire new breed of cat to America. Because of its racoon-like black-and-tan markings, the locals began calling the breed the Maine Coon. Over the years this popular domestic has lost most of its coon markings, yet still retains the name.

We apologize to Machias for getting the name wrong. But at least we get to publish another great picture of him!