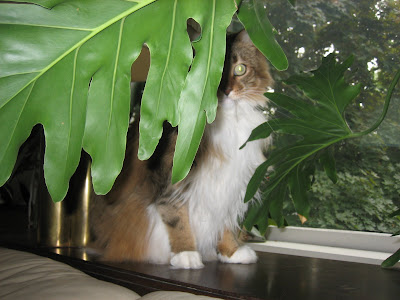 My latest guest cat, Morchai, a pedigreed Maine Coon, lives with amanuensis' friend Judith. He weighs in at about 20 pounds! Like me, he loves to lurk behind a potted plant and pretend he's in the jungle. He's quite playful and doesn't mind at all posing for photographs, especially if he can catch hold of the camera strap. Morchai, what big teeth you have! 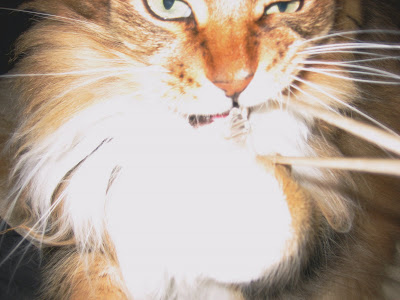 Maine Coons originated in--where else?--the state of Maine, where they were highly prized as mousers, and needed their thick, silky fur to keep them warm in the winter. But this breed is also a popular show cat; a Maine Coon cat won the first cat show ever held in the U.S.A. There are a lot of myths about Maine Coons, including one that they arose from domestic cats who mated with raccoons, or possibly with bobcats. But that's just not true, as neither raccoons nor bobcats can mate with domestic cats. My suspicion is that humans just liked having these big, friendly cats hanging around their barns.

Morchai will join the Friday Ark this week, and this Sunday's Carnival of the Cats.