Why cats are much better than dogs, part 4

We knew it was good to be catted, but now there's scientific proof. The Minneapolis Star Tribune reports today on yet another reason why cats are much better than dogs.

A new study suggests cat owners are less likely to die of a heart attack or stroke than people who, well, don't own cats.

And no, dogs don't do the same trick.

The study, by researchers at the University of Minnesota, found that feline-less people were 30 to 40 percent likelier to die of cardiovascular disease than those with cats.

Yet dog owners had the same rate as non-owners. "No protective effect of dogs as domestic pets was observed," said the study, which was presented Thursday at the International Stroke Conference in New Orleans.

Dr. Adnan Qureshi, a stroke expert at the university, said he decided to raise the question because other studies have suggested pets can help reduce stress. He and his team analyzed a group of 4,435 people who had answered questionnaires about pet ownership and other risk factors.

But the cat-dog differential came as a surprise. "We don't understand this completely," he said, but "it's probably not a coincidence."

Asked if he owns a cat, Qureshi replied: "No. Maybe I should get one, though. With this new research, I think the time has come to change." 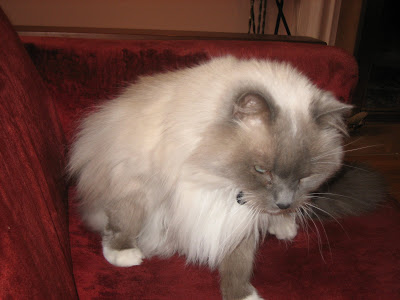 I'm heading off now to do some more research. For more furry goodness, check out Modulator's Friday Ark.