Why cats are much better than dogs, part 2


Amanuensis and I watched Cesar Millan, a.k.a. The Dog Whisperer, on the National Geographic Channel this morning. For a dog person, Cesar is remarkably intelligent. In dealing with a dog who was aggressive toward his family's perfectly charming Himalyan, Cesar remarked that for a dog and a cat to get along, the dog must submit to the cat.

Confused? Learn Why Cats are Much Better than Dogs. 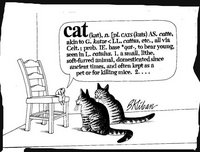 Self portrait with cattitude

Who is B. Kliban and why are his drawings so, well—catlike? Big cats, little humans. Cat as airplane. Helicat. I purred with pleasure at each and every one.

At least two of Kliban’s witty drawings depict the cat as artist. Can there be any doubt that B. Kliban is a pseudonym for Burton Rustle, one of the felines to whom this best-selling collection is dedicated?
Mao!

A sad tale of mass catticide

In this sad tale of mass catticide, attributed to the Minnesota author Wanda Gag, a poor peasant brings home

Naturally, mayhem ensues. I could have told Gag what would happen. Cats generally subscribe to the Highlander principal: when it comes to cats, there can be only one. That’s why I am certain that the real author of the story was the poor, bedraggled kitten, unnamed here, who survives the carnage by hiding in a bush.

Some critics have interpreted Gag’s story as a parable about the dangers of overpopulation. Hadn’t she heard about birth control?

The illustrations are charming, but there’s not a laugh in the whole book.

Although my amanuensis claims that this book was one of her childhood favorites, I suspect that she is lying. If amanuensis had her way, she would collect cats like other women collect shoes. In fact, from what I’ve overheard, her whole family is not only catted, but multiply so. 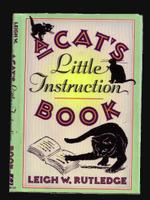 Leigh Rutledge claims to have lived with 28 cats when he published this book in 1993. Who knows how many he lives with now? One of them authored this entertaining and informative how-to book for young felines. I only wish that Rutledge had had the good sense to admit that he was only the amanuensis. Too many great feline authors—much like the great women poets of the past—remain anonymous!

“Never go to a veterinarian who doesn’t have cats himself,” writes the unnamed author of this guide to becoming the perfect feline. Having just been to the vet yesterday, myself, I can certainly confirm that’s good advice. My vet, Sally Dale of East Lake Animal Clinic, has a couple of cats at home and clearly loves them. She pronounced me fit, although she had the bad taste to say that at seven years old, I have reached middle age. I growled, but had to submit to her poking, prodding, and sticking with sharp needles.

While the exam proceeded, my amanuensis related how I’d learned to kill mice, despite the fact that my previous host had my front claws removed. (More about this anon.) My amanuensis stated she would never have done so herself; that was some comfort to me. “Own nothing, and be owned by no one,” says the author of this book. How poignant! But, I would say, to the contrary: if you sit on it, you own it.

And finally, here’s a piece of advice that echoes what my mother always said: “Learn to appreciate fine books, especially when someone else is reading them.”

By the same author: If People Were Cats, Diary of a Cat, Cat Love Letters.

God is a big black cat 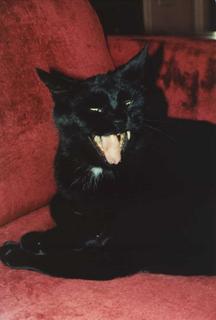 
a cat with cattitude

Among the catted, watching cats and listening to cats are favored activities. From personal observation of my esteemed colleague, Aloysius Katz, I believe that the answer is yes--cats do snore. This morning as he slept at the foot of my bed, Aloysius emitted a soft but distinct trill. It was not a purr. It was definitely a snore.

Apparently others have noticed cats snoring. Unfortunately, that article, apparently by a veterinarian, has been sent to the litter box. The vet opined that cats might have respiratory issues that caused snoring. I think they just have issues. Some of them sound like snores.

The Body of the Great Cat

All praise to thee, O Ra!
Lord Ra, exalted Sekhem!
Thou art the Great Cat:
And thus,
Avenger of the gods;
And judge the rightness of words;
And overlord of magistrates.
You preside over the Holy Circle:
Truly the embodiment of the Great Cat.

After some difficulty, Aloysius has found out how to post to his blog
via email.

Into the litter box

After attending a recent convention, my amanuensis reported:

There was considerable interest in putting together an anthology of works around the theme "Into the Bullshit." I talked with two potential contributors who found it amusing, at least over drinks. What stops me from doing this is the fact that of course a very popular book called "On Bullshit" has been recently published. Or, is that an advantage?

Watch for "Into the Litter Box," appearing irregularly on Catymology.

Why cats are much better than dogs


We are told it's a dog-eat-dog world, and I for one am prepared to believe it. That is the trouble with the world: it is just too doggone doggy. A bad play is a dog. A slow horse is a dog. An ugly woman is a dog. (Paradoxically, as well as parenthetically, a sharp-tongued woman may be either a bitch or a cat, which in my opinion is a perfect example of catachresis.)

A dog's life is short and insipid, but everyone knows that a cat has nine lives. Indeed, there is something positively redemptive about cats. For example: a dog town is a place to try out a play that might be a dog, but even a dog of a play could be improved by the addition of a suitable catastrophe.

Dogs know their catechisms and are easy to categorize, but cats sit cater-wumpus to the world, defying dogma.

No one in his right mind wants to go to the dogs. The dog house is a place where naughty boys are sent--the same naughty boys who go willingly to a cat house.

A cat may be a prostitute, but all dogs, with regard to their masters, are sycophants.
For a dog-like devotion is blind, but the cat-eyed lover sees in the dark.

Etymology, the study of words and their derivation, has long been of interest primarily to university professors. But a new theory developed by Aloysius Katz, aka Aloysius Pangur Ban, M.F.A.(Master of Feline Arts) has revolutionized the study of words; what is more, it has catalyzed a profoundly unsettling reaction among scholars of many other disciplines, from anthropology to zoology. I refer, of course, to catymology, the science and art of cattitude.

I and Pangur Ban my cat,
'Tis a like task we are at:
Hunting mice is his delight,
Hunting words I sit all night.

Better far than praise of men
'Tis to sit with book and pen;
Pangur bears me no ill-will,
He too plies his simple skill.

'Tis a merry task to see
At our tasks how glad are we,
When at home we sit and find
Entertainment to our mind.

Oftentimes a mouse will stray
In the hero Pangur's way;
Oftentimes my keen thought set
Takes a meaning in its net.

When a mouse darts from its den,
O how glad is Pangur then!
O what gladness do I prove
When I solve the doubts I love!

So in peace our task we ply,
Pangur Ban, my cat, and I;
In our arts we find our bliss,
I have mine and he has his.

Practice every day has made
Pangur perfect in his trade;
I get wisdom day and night
Turning darkness into light.

To view this poem in Gaelic, go to