Annals of Catymology: Purrs in fact and in litterary theory 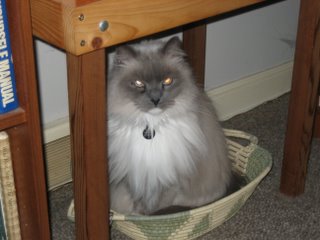 I was just appropriating this cool new basket when amanuensis began muttering something in a foreign language:

She'd been hunting round the World Wide Web again. (And didn't I wish that I could play with that vast ball of twine?) She calls it "research."

I mentioned before that amanuensis studied for a Ph.D. in literature. Of course, she had to study literary theory. "I left that field," amanuensis confided. "It was claustrophobic. There wasn't enough room to swing Schrodinger's cat."

Now, she'd found out that a clever grad student, Elizabeth Brunner, wrote an essay in which the author adopts three feral cats--surely a cataclysmic decision. Trying to get advice on how to live with the beasts, Elizabeth accidentally connects with an enigmatic figure who reminds her of the literary theorist Paul De Man. This guy was a deconstructionist. That means he liked to contradict himself, when he wasn't swinging from chandeliers.

The deconstructionist spoke: "Those cats are simultaneously somewhere and everywhere and nowhere."

Pointing at the latest disaster, I asked, "Any suggestions on handling these feral cats?"

"If feral implies outdoors, but the cats are indoors now, then un-feral. And wild, certainly wild, yet not of the wilderness, so un-wild. The polarities of inside and outside have been reversed but they are still the same polarities..." I started to ask for clarification, but the mad rampage of three fur-balls flashed past us, knocking over a stereo speaker and a pile of books. He continued, "Conspicuous, complex, and enigmatic."

And that's exactly how I see myself, of course: conspicuous, complex, and enigmatic. But the perversity of the deconstructionist made my fur stand on end:

"The sign of the purr signifies that the purr-er in the intertext of purring really doesn't want to purr at all but intends to counter-purr. Don't be deluded that a low vibratory noise from the heart of a cat means pleasure -- this kitty utterance shows hostility as the unspoken intent. The cat purrs as a seductive trick to escape from captivity. Or, at best, the purr is something which means nothing, absolutely no-thing."

As a practitioner of catymology, I am always interested in hearing about Die Katzensprache. In fact, some scientists have actually studied why cats purr. An article in an old issue of the Cornell vet school Chronicle reports on real research on the matter of how we felines train our catted ones to do our bidding:

"No matter what we like to believe, cats are probably not using language," said Nicholas Nicastro, a self-described cat person who has documented hundreds of different feline vocalizations in the common house cat (Felis catus) and its ancestor, the African wild cat (Felis silvestris lybica). His study, which he described at the June 5 [2002] 143rd meeting of the Acoustical Society of America, in Pittsburgh, "shows that some very effective cat-to-human communication is going on," he said. "Though they lack language, cats have become very skilled at managing humans to get what they want -- basically food, shelter and a little human affection."

Not using language? What does Nicholas know? Sure, he's a scientist, but has he asked his cats? I climbed up on amanuensis' lap. She was at the computer again. I figured she was writing about me. I purred.

I loved that essay! Though I must say my experiences with ferals have been very positive. The ones I had were so grateful to have a home that they actually took pains to be nice to me. Unlike 2 of my current spoilt brats who were born into comfy homes. They treat me like they are doing ME a favor by letting me take care of them.

In The Dialectic Between Cat And Dog The Socially Constructed World, The Human Organism Is Transformed.
http://evilevilclown.blogspot.com/2006/01/evil-clown-thanks-catymologist.html

Thanks, Litotes! Your tasty goodness is much appreciated.