Me and my humans were invited to a big Halloween bash this weekend. I went as myself, of course. Who could beat my silky redpoint coat? Don't forget that a certain seductive female recently referred to me as a "sexy meezer." Who am I to disagree?

Turns out a lot of the partying crowd had cats on their mind. 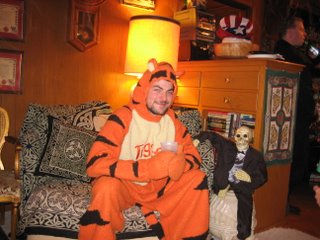 First up is Wolfgang, looking quite fierce as "Tigger." Oh, and he's a poet too. (Don't tell Katz!)


Next, there's this fetching little feline--who else but the Lion King? 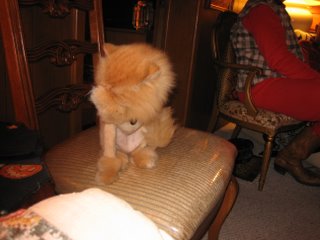 And who's that with the silly smirk on her face? Could it be amanuensis, High Priestess of the Church of Catymology?

Well, I'd better finish up, cause it's almost time for the Carnival of the Cats over at Watermark. 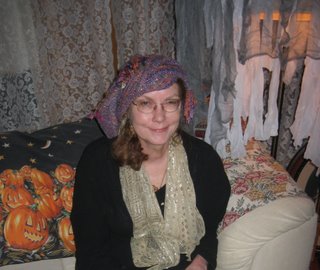 You want me to wear WHAT? 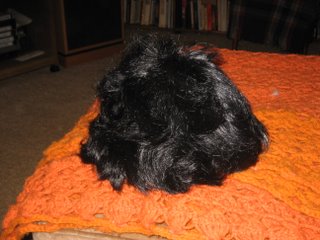 When I saw this thing sitting on the hassock, it appeared to be another cat--a fluffy, black furball of a feline. Oh, no, I thought. They've gotten another cat! I couldn't believe that my humans would do that to me, after all the hours I've invested in hunting rodents and keeping their furniture well covered in fur.

But it turned out that it was almost worse than another cat--they actually wanted me to wear the furry thing as a Halloween costume. The nerve!

Isn't my own silky white and beige coat good enough?

Silly humans! One of them will just have to wear the thing. I'm out of here! 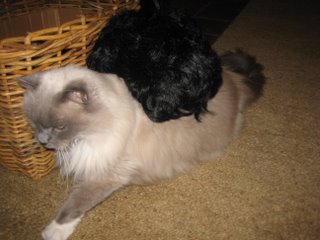 I'll bet that a lot of silly humans are going to be trying to dress up their pets for Halloween. If that's your thing, check out the Friday Ark and this Sunday's Carnival of the Cats, over at Watermark.

Cartoon E-Book from Dharma the Cat 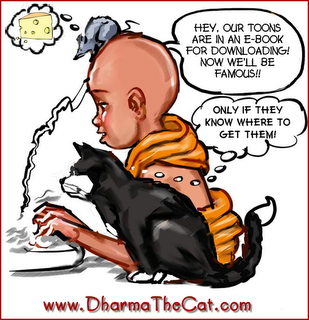 Back in February, I wrote about Dharma the Cat, a comic strip about a wise cat whose job it is to lead a novice monk, Bodhi, on the path to enlightenment. Now Dharma the Cat has published a new cartoon E-book. Check it out at Dharma's website. (Scroll down to the link where you can preview and buy the E-book.) 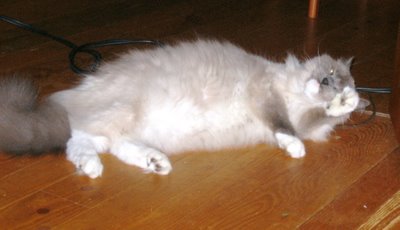 He was just trying to wash his face, when some nosey human came along with the camera.
That's Aloysius' way of performing his toilette.
Lisaviolet has invented a new game: Tummy Tuesday! Since Tuesday is Aloysius' day to simply be a cat, I guess that means that every Tuesday is Tummy Tuesday. If your cat wants to play, be sure to tag your post "Tummy Tuesday." 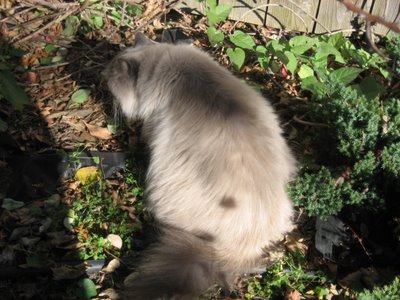 I’m Aloysius Pangur Ban--
A would-be hunter, despite my girth--
Descended from a mighty clan
Whose fame resounds across the earth.

For Pangur Ban, my ancestor,
Inspired a poet to lionize
Him for his stealthy ways and for
His sharp, swift claws and glittering eyes.

More gorgeous cats of all shapes and sizes are at the Modulator's Friday Ark, and on Sunday, at the Carnival of the Cats, hosted this week by the King of the Catbloggers, Laurence Simon, at Catcall.

How not to get people to join your organization

On Saturday, I attended a book fair and noticed a table run by the local chapter of a well-known animal welfare organization. I'm not going to name the organization, because I don't want to believe that the Volunteer I spoke to represented the best they had to offer. I might have joined, but I got turned off by the way the Volunteer addressed me. Here's how the conversation went:

Vol (handing me a brochure): Hi, do you know about [our organization]?

Me: Yes, I'm interested in your work. Actually, I have a blog that's about cats and sometimes we write about animal rights. Here's my card.

Vol (depositing card in a bowl without reading it): We're working right now on legislation to outlaw puppy mills, but we also work on cat issues.

Me: I'm against puppy mills. I always adopt cats from shelters or from friends who can't keep them.

Vol: Oh, you should never buy a kitten from a breeder.

Vol: Well, people shouldn't breed their cats and then try to get rid of the kittens.

Me: No, our cat was already four years old when we adopted him, and his owner got sick and couldn't keep him.

By now, the Volunteer had me on the defensive. Wanting to prove that I was not an animal abuser, I proceeded to explain how my sister and my niece, who live in the country, have taken in stray cats and dogs over the years, and how this was something our family just did naturally. I guess the Volunteer thought I was okay after that, but I still felt dissed. She seemed to assume that I was just one of those people who might encourage the breeding of unwanted kittens.

Here's some advice for those of you who want to recruit me to your cause:

Organizing isn't about you. Don't just talk about what your group is doing. Don't just explain what the issues are that you are working on. They may be worthwhile issues, but if I'm going to join you, I need to relate to you on a personal level. Ask me what I'm interested in. Ask me what my blog is about. Try to find out what issues I consider important, and then tell me how your program relates to them.

My advice may seem elementary, but when I think about how many people are out there trying to get me to support their causes, their candidates, their political agendas, and their self-interests, I think it bears repeating: Organizing is not about you.

Something called "winter" is threatening to turn my garden into a pile of cold, dead stuff. A couple of days ago we had "frost." The green plants turned brown overnight. 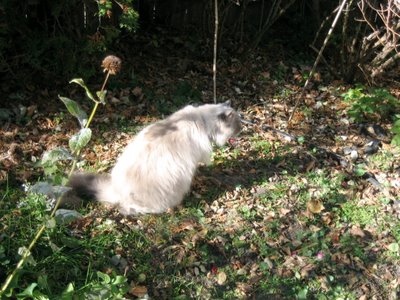 But not all of them! In the middle of the garden, where my humans have planted hardy bush roses, these blossoms continue to bloom. I'm gathering roses while I can. 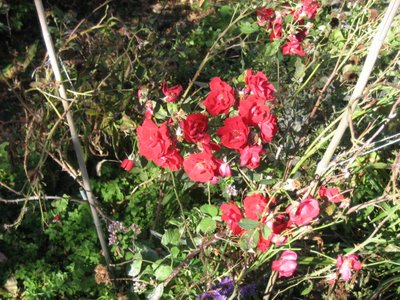 Celebrate the Carnival of the Cats on Sunday, October 15 at The House of the Mostly Black Cats and help Mini get treats!

Cosmo & Amber: A moment of peace

My first guest dog, Cosmo, and Amber, one of two cats who live with my human friend Nancy. Nancy says it's rare for them to share their nap space. I think it's important for cats and dogs to call a truce sometimes. It is a peaceable kingdom, after all.

More furry goodness at Modulator's Friday Ark. And on Sunday, the Carnival of the Cats will be at The House of the (Mostly) Black Cats. 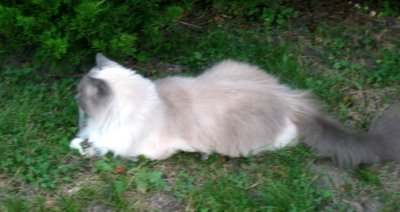 A succession of hills rose and fell, like sleepy giant cats curled in the pooled sunlight of time.

-- From “Pinball, 1973, “ by Haruki Murakami. Translated by Alfred Birnbaum

The Cheshire Cat comes . . . and goes

3Click the image to read more of Alice in Wonderland--an Interactive Adventure.


I can't believe I've gone a whole year without mentioning one of the most famous felines of them all, the Cheshire Cat. As the story goes, Alice is talking to the Cat:

“I wish you wouldn’t keep appearing and vanishing so suddenly; you make one quite giddy!”

“All right,” said the Cat; and this time it vanished quite slowly, beginning with the end of the tail, and ending with the grin, which remained some time after the rest of it had gone.

“Well! I’ve often seen a cat without a grin,” thought Alice; “but a grin without a cat! It’s the most curious thing I ever saw in all my life!”

An artist, Ruthann Logsdon Zaroff, who is big fan of Alice in Wonderland, has created an animated version of the cat's slow disappearance. And there are many other amusing illustrations, puzzles, and games on the same site.

That post about Wine for Cats got me thinking. Here's your Blogiversary present! 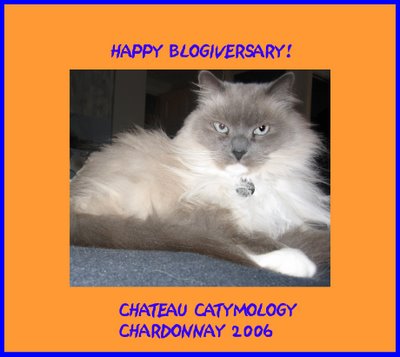 P.S. Click on over to the Modulator for the Friday Ark. (It's on Friday, dude!) And Sunday brings the Carnival of the Cats at Curiouser and Curiouser. Catch the cat-related reference there? 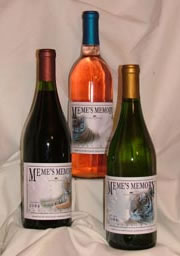 The Wildcat Sanctuary, one of my favorite charities, has come up with a new fundraising idea--commemorative wine. The latest edition of their newsletter explains:

This year we will be selling three varieties of commemorative table wine. Each bottle has a specially designed label paying tribute to TWS' beloved Bengal tiger, Meme. Meme's Memory will be available for $20 a bottle or collect all three varieties for $50.

These special items can only be purchased at the venue on October 27th. Get your tickets today so you don't miss out on this special one-time only offer.

"The Venue" is the big fundraiser they are planning, called the "Jungle Boogie." Even though I'm a teetotaler where alcohol is concerned, I think this is the perfect gift for my humans.

Speaking of humans, have you heard that human females are more likely to buy wine with cute animal pictures on the label? Could that be true?


My first blogiversary is coming up on October 6, and I'm already starting to get excited. I'm wondering what amanuensis is going to give me. 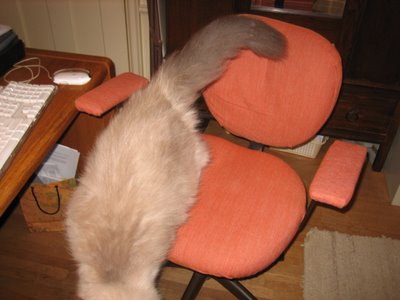 Oh, wait. She just informed me that my first present is right here: new upholstery for my desk chair. Unfortunately, she interrupted my nap to show it to me. I'm out of here!

The Owner's Manual: #149 Best of Me Symphony has a brand new look and a spiffy new motto: "Under a bleedin' cyber tree ... bloggy wordsmiths fair ... bang their keyboards clickily ... and you are there ." Oh, yeah it's got Darcy's post above the fold, but the best post is Mad Pigeon's offer to sell the Iranian regime on eBay.

Carnival of the Cats # 132 is up at Pet's Garden Blog, and a very cool edition it is, too.

Last week, the Carnival of the Vanities went home to roost at Silflay Hraka, where our intrepid editor, Kehaar, has sifted through the posts. Editing--what a good idea!

Mark Rayner continues his superhuman effort at the Carnival of Satire, where editing is expected.