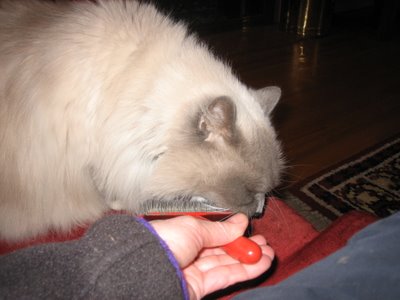 Now available: the self-bushing model. A human only needs to hold the brush steady, and this clever feline--moi!--brushes himself.

The Friday Ark is up at Modulator. On Sunday, look for the Carnival of the Cats at Mind of Mog.

A pear-shaped cat sings the blues 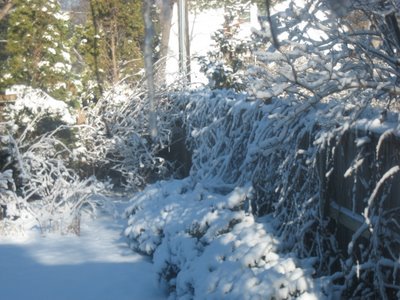 Well, I woke up this morning,
Feeling kind of glum
It was the 25th of January
And winter storms had come.

I looked out the window
At my garden draped in snow
And nothing there was moving
Not even a lousy crow.

Oh I’m a pear-shaped cat
And I can’t cat around
When all those nasty snowflakes
Are lying on the ground. 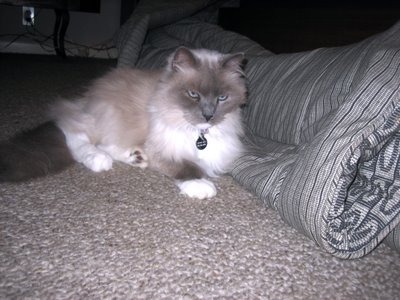 I curled up next to the bedspread
Just trying to keep warm
And I dreamed I was in Egypt
Far away from this storm.

Yes I dreamed I was in Egypt
Eating tunafish pies
And there I was escaping
Those shadows blue as my eyes.

Oh I’m a pear-shaped cat
And I just mope around
When all those nasty snowflakes
Are lying on the ground.

Don't mope all weekend: get on over to the Friday Ark and hang out with the other critters. On Sunday, join up with the Carnival of the Cats at Mind of Mog.

Never look a gift lion in the mouth

Didn't I say never to look a gift cat in the mouth? Well, a cartoonist named J. Jacques has a new take on that proverb and several others. Check out the Poor Lion's Almanac at Questionable Content. Jacques posts his cartoons 5 times a week. Since he's a young dude (aren't they all?), his cast of characters includes a bunch of young dudes and dudesses, some of whom work at a coffee house named Coffee of Doom. There are also several animal characters, including Mieville the cat, of whom it is said:

Apparently he has murderous tendencies. It is unclear whether he approves of Marten or not, or whether he has committed any murders.

I wouldn't want to look Mieville in the mouth, either. But I will be checking on on Questionable Content from time to time to see what he and his friends are up to.

Since Tuesday is Katz's day to hang out and generally cat about, I thought I'd fill you in on some of the latest gastronomical news from my neck of the woods. It's all about a restaurant called Black Bamboo. 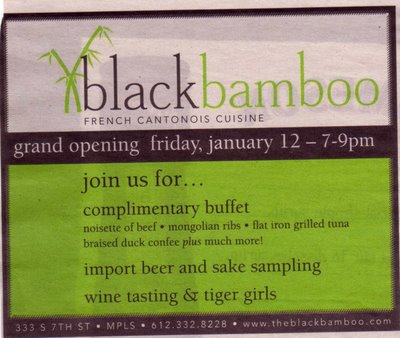 There are a few mistakes in this ad, which appeared in City Pages a couple of weeks ago, but still I'm gonna check this out. I could go for some Mongolian ribs, as long as they didn't come from real Mongols. And I don't understand how you can grill tuna on a flat iron, but, hey, if that's what they do in Cantonois joints, I'll give it a try. The "duck confee" should be tasty, too, but don't these guys have a French dictionary? Last I looked, it was spelled "confit." It sorta makes you wonder just how French they really are.

But what really gets my motor purring is that promise of "tiger girls." Who cares if the concept sounds like something out of the latest satiric confection Absurdistan: A Novel

by Gary Shteyngart? I think I'm in love, already. 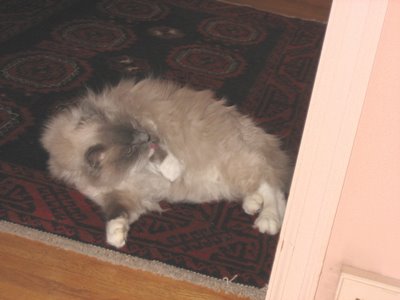 Tuesday is Aloysius' day to simply be a cat, so I'm posting this picture on his behalf. We'll be away from blogging for a few days, but we look forward to seeing all the cat tummies when we return.


Lisaviolet has invented a new game: Tummy Tuesday! If your cat wants to play, be sure to tag your post "Tummy Tuesday." 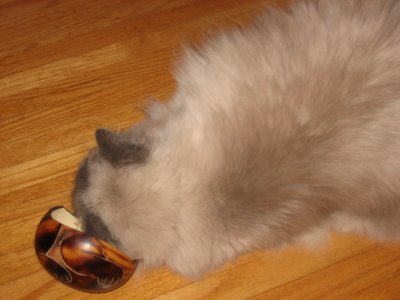 Who knew that gourds were such a big art form? I sure didn't, until I got this cat toy -- oops, excuse me! -- cat gourd for Christmas. The best part about these rolly polly gourds is that they roll really well. Ahem! 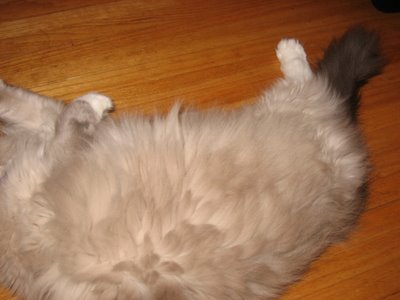 Me too! Perhaps I should rename myself the Gourd-Shaped Cat?

More rolly polly cats & other critters at Modulator's Friday Ark. And don't forget the Carnival of the Cats, hosted this Sunday at Pet's Garden Blog.

Tummy Tuesday: all tired out 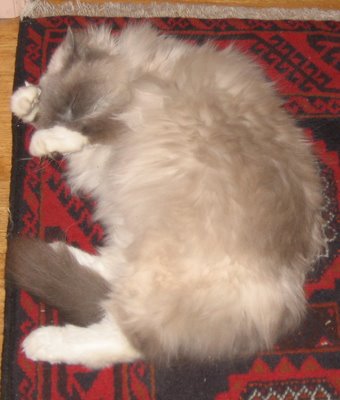 Tuesday is Aloysius' day to simply be a cat. He's very good at being a cat, isn't he?


Lisaviolet has invented a new game: Tummy Tuesday! If your cat wants to play, be sure to tag your post "Tummy Tuesday."

Darcy's quote of the day

You can't get a leopard to change his spots. In fact, now that I come to think of it, you can't really get a leopard to appreciate the notion that it has spots. You can explain it carefully to the leopard, but it will just sit there looking at you, knowing that you are made of meat. After a while it will perhaps kill you.

The Bank of Queensland issued a credit card to Messiah the cat when his owner Katherine Campbell applied for a secondary card on her account under its name.

'I just couldn't believe it. People need to be aware of this and banks need to have better security,' Campbell told local media on Thursday.

The bank said the cat's card had been cancelled. 'We apologise as this should not have happened,' it said in a statement.

If banks can issue press releases, why can't a cat have a credit card? How else are we going to pay for our peacock feathers and our ahi tuna rations?

On second thought, maybe we shouldn't tell Darcy about this. 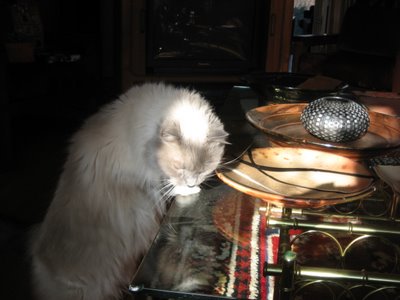 Sunshine reveals so much--dust on the coffee table, and my image in the glass. (Click on the image for a larger view.)

Don't forget to visit Modulator's Friday Ark this weekend. And on Sunday, the Carnival of the Cats will be rolling along on Leslie's Omnibus.