The fall equinox was last Sunday, September 23. In honor of the season, here is my poem. 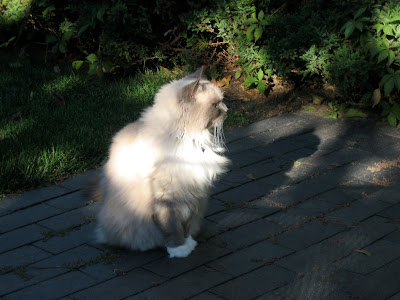 On the day that balances dark and light,
When the earth tips toward winters’ jaws,
May the Great Cat protect you all
And send you a harvest of mousie paws.

And for your humans, a bottle of wine
To complement the harvest moon.
For ripeness is all, as the poet said
And winter snows will come too soon.

I'll be boarding the Friday Ark. And don't forget the Bad Kitty Cats Festival of Chaos at Mind of Mog! On Sunday, the Carnival of the Cats is at Life from a Cat's Perspective.

Caught in the act 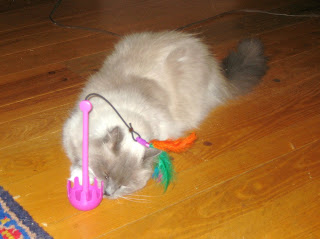 Amanuensis' sister gave me this toy when she visited in July. I pretended not to like it then, but guess what? I decided to give it a try. Of course, I had to inhale a little of the nip beforehand.

More fun and games at the Friday Ark. And on Sunday, catch the Carnival of the Cats at This, That, and the Other Thing.

Wordless Wednesday: in the garden 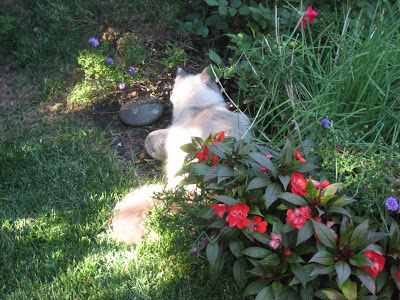 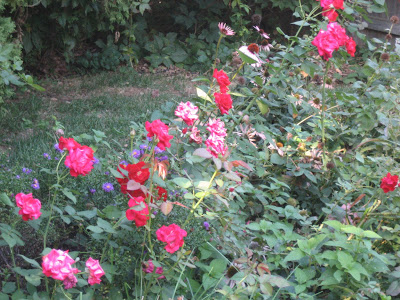 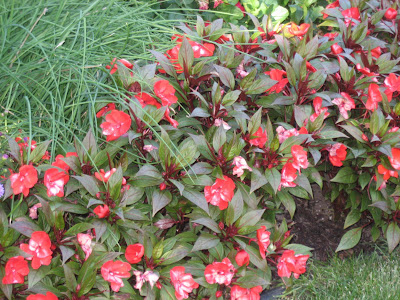 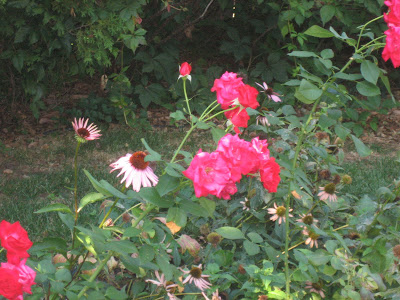 Frost predicted and a meme

Frost was predicted for Saturday morning, but it didn't get to the city. My flowers are still blooming.

Meanwhile, Tara has tagged me for a meme:

The guidelines for this tag:
1. Link to your tagger and post these rules
2. Write some facts about yourself: some random, some weird, some just plain fun.
3. Tag 7 people at the end of your post and list their names (linking to them)
4. Let those 7 people know they’ve been tagged by leaving a comment at their blogs.

The challenge is to keep it interesting without making the reader think “Um, too much information…”

Here are seven things about me:

I don't know if there are any cats left who haven't been tagged for this meme!

When your tail is as big and fluffy as mine 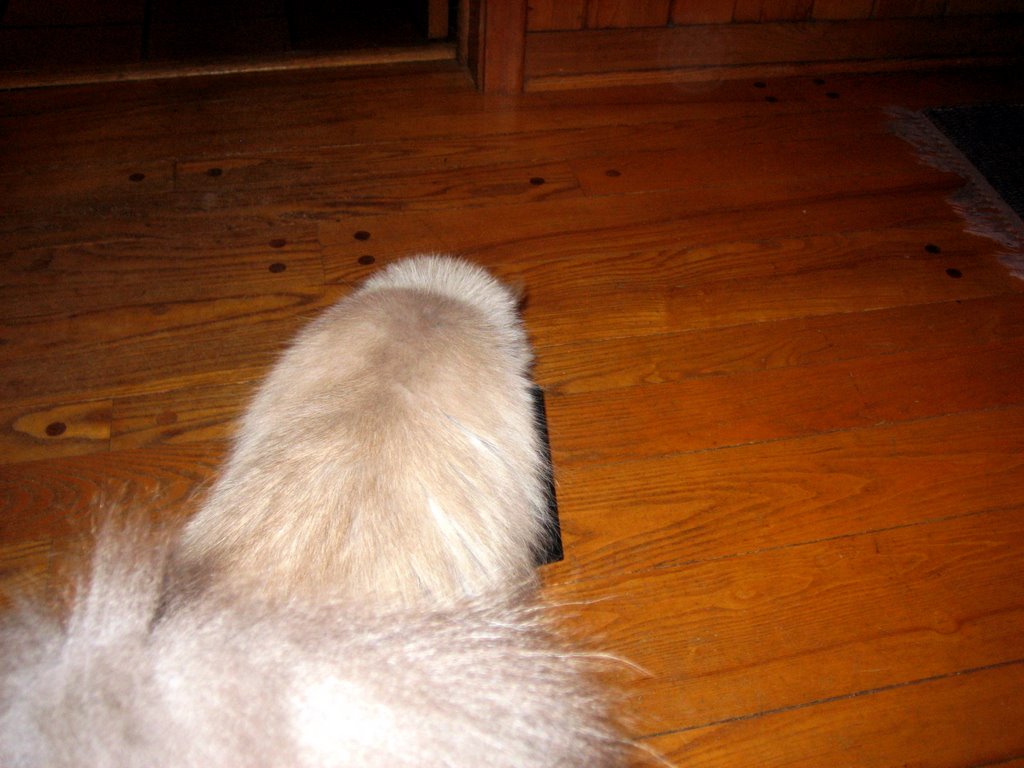 You have to be careful when going outside 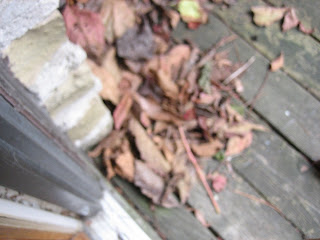 Or else you get TAIL TRASH. 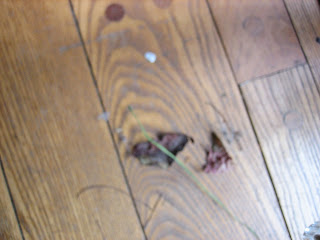 Which makes the humans get out the dread machine.

You know the one I mean!

Check out the Friday Ark for more. This week's Carnival of the Cats is at House of Mostly Black Cats.

It's my gotcha day! 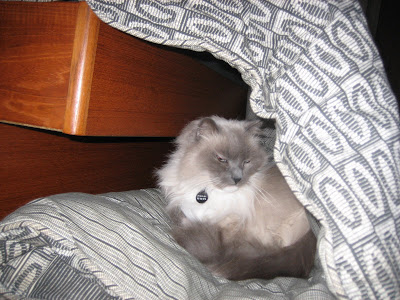 Five years ago today my humans adopted me. I was a little timid when I first came to live here. My previous human had to give me up because he was sick, and I went to live with a friend of his. All the changes of people and places made me nervous . My new temporary caregiver was nice to me, but she had a dog; I don't like dogs! And she was away at work all day and often went out with friends in the evening.

The woman knew my new human Dad from work, and when he heard I needed a new home, he mentioned it to amanuensis. She had been wanted to adopt a cat. So one evening my new human Dad picked me up and took me from the apartment where I had been living, and brought me to the new house. It was a very big house, but I quickly found some cozy places to curl up--like under the end of the comforter.

I also like to sit on the wicker stool in front of the window, and to sleep on the bed--preferably in between my humans! But what I like most about living here is that I can go out in the garden and cat around. I like to chase leaves, grasshoppers, and chipmunks, and when I get tired I can nap under a bush. And I like having a human Mom, amanuensis, who makes sure that my pictures and stories get out on the blog. I had found the best home a cat can have! 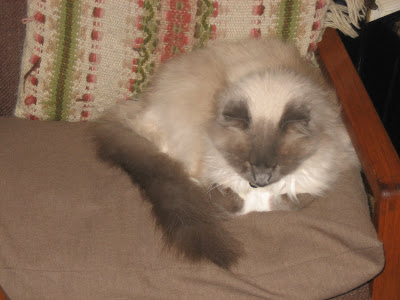 I am practicing living in the moment.
I've told you before about Dharma the Cat: Philosophy with Fur--an online cartoon strip and E-Book about a wise cat whose job it is to lead a novice monk, Bodhi, on the path to enlightenment. Now Dharma's website has morphed into a blog, with a new episode posted every week. The most recent entry, "Mindfulness," illustrates the Buddhist concept of living in the moment. Dharma's comment: "When your head’s in the clouds, your feet miss the path!"

At Dharma's blog, you can also get links to funny cat videos, purchase the E-Book, and read commentaries by scholars of various faiths--Jewish, Hindu, Taoist, Muslim, and Wiccan as well as Buddhist.

Living in the moment is something all cats practice, and in time, we achieve perfection.

P.S. Wednesday, September 12 is the 5th anniversary of my Gotcha Day!

The Friday Ark is up at Modulator. On Sunday, visit the Carnival of the Cats at Mind Of Mog.

Yo, cats and catted ones. Darcy here.

Research is strange, but viral research is perverse. And fast. It took the New York Times and several other news media only a New York minute to connect the unusual sighting of a baseball-loving squirrel with the legendary Norse Ratatosk--a.k.a. "Squirrel of Discord"--during a recent Yankees-Red Sox game. During the game, the squirrel ran up and down the right-field foul post. The NYT interviewed a scholar of Old Norse, who saw some similarities between the Yankees-Red Sox battle with that between the eagle and the dragon in the Norse Eddic poems.

It took only minutes more for a passel of sports bloggers to plaster the story all over the WWW, thus gumming up my thingpoddy and raising my hackles. I started goggling around for the truth. 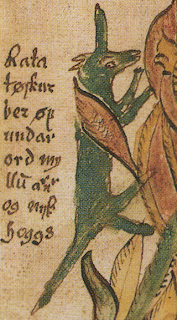 One of the first things I came up with was this image from a 17th century Icelandic manuscript: note that Ratatosk is depicted with a horn, and that--if not black--he's a dark shade of green. We have seen his avatars before: here and here.

I goggled on over to the Internet Sacred Text Archive, where I found this suggestive excerpt:

The Ballad of Grimnir

Ratatosk is the squirrel | who there shall run
On the ash-tree Yggdrasil;
From above the words | of the eagle he bears,
And tells them to Nithhogg beneath.

Wikipedia explains: "In Norse mythology, Ratatöskr (drilling tooth, sometimes anglicized Ratatosk) is a red squirrel who runs up and down with messages in the world tree Yggdrasill and spreads gossip. In particular he ferried insults between the eagle at the top of Yggdrasill, and the dragon Níðhöggr beneath its roots."

The scoundrel Ratatosk may have been a red squirrel, but quite a few recent references have him of a different color, the Wikipedia item notes:

Ratatosk appears as a woman running a temp agency for the gods in Esther Friesner's "Temping Fate" and is quoted as saying "I am Ratatosk, the Dark Squirrel of Doom!"

Virtual Ratatosks are littered all over the WWW. Most of them refer to the popular video game, Tales of Symphonia: Knight of Ratatosk. But there are others. For example (and I don't have a clue as to what this means) Ratatosk is also

A musician--"experimental, ambient, alternative"--living in Cardiff, UK, whose songs will likely lull you into a hypnotic state, styles himself Ratatosk. Why? Beats me. Just go on over the MySpace and look him up. While you're at it, look up all the other Ratatosks who use the Squirrel of Doom as an avatar or a screen name.

Then tell me what this means.