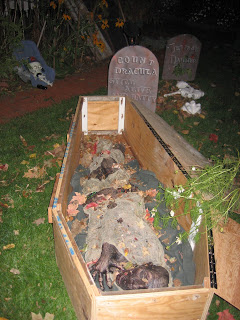 I tailed the humans to a Halloween party! Well, so to speak, cause, you realize, as a virtual cat, I don't technically have a tail. (Therefore no tail trash.)

Ahem. Where was I?

Here are some pictures of the Halloween party. 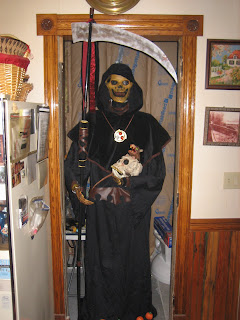 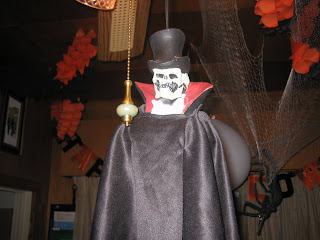 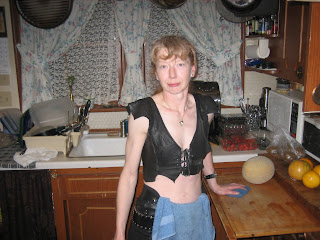 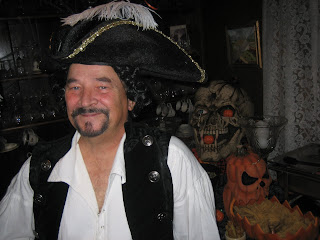 
P.S. This week's Bad Kitty Cats Festival of Chaos is a riot! 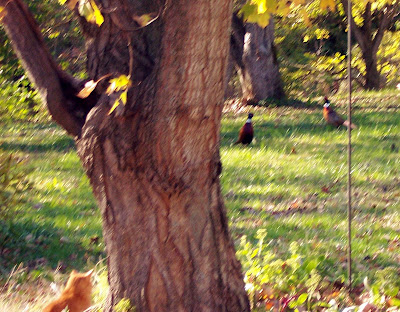 My Ohio friend, Goldy, seems to be having all the fun today! Oh, for a fine, fat pheasant of my own!

We'll be boarding the Friday Ark. Carnival of the Cats on Sunday at: Catsynth, one of the coolest cat + music blogs around. 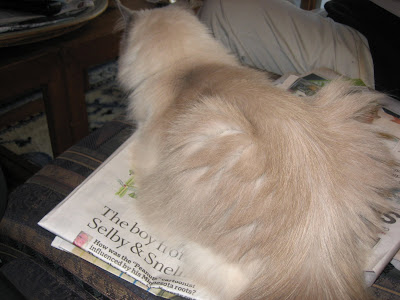 I've heard the humans talking about the new TV special about Charles Schultz, creator of the Peanuts comic strip. And why not? A cat can hardly sit on a newspaper anywhere without getting his tush in some story about Peanuts--especially here in Minneapolis, where Charles Schultz grew up.

I know that many humans loved that comic strip. The only problem with it--not enough cats! There's that sweet and soulful dog, Snoopy--he's one of the stars. But the only cat was Faron, who belonged to the curly-haired Frieda. I just don't think that's fair to felines.

And now for our sponsors: today's Carnival of the Cats is brought to you by our friends Missy, KC and Bear.

They don't call me Professor Katz for nothing


Thanks to our Maximum Leader, I've learned that Catymology has been noticed by several enterprising students at Carnegie Mellon University. In their study, this blog ranked 77th among the most informative blogs---one step above Hugh Hewitt!

Bloggers Blog: Carnegie Mellon Study Ranks Most Informative Blogs: A recent Carnegie Mellon study used higher mathematics to answer the question: if you want to be informed about what the entire blogospohere is talking about, but you can only read 100 blogs (out of the millions available), which blogs should you read? We were very happy to learn that BloggersBlog.com came in 8th on the list. Other blogs that ranked high on the list include Instapundit, Michelle Malkin, Boing Boing, BlogHer, Gothamist and Micropersuasion. You can see the website for the study here and a PDF file for the report can be found here. The paper was awarded the best student paper award at the ACM SIGKDD International Conference on Knowledge Discovery and Data Mining. (via Data Mining) Here is a list of the 100 top ranked blogs.

Our friends at The Modulator, hosts of the Friday Ark, were ranked 7th, and Conservative Cat ranked 46th.

I'm so overwhelmed that I need to take a nap. 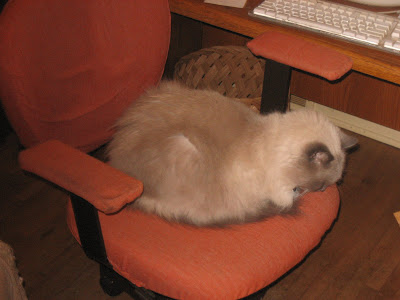 My human is rolling on the floor laughing at this great YouTube video by the extremely talented Cory Williams. Boy, am I glad I'm not a kitten anymore!

I have to admit, though, that I have been known to give her a litte love bite now and then.

More about Cory and free music downloads at SMP Films.

Amanuensis' sister, who lives in Ohio, sent this picture of the newest cat in the barn. Look at the beautiful markings on that little guy! 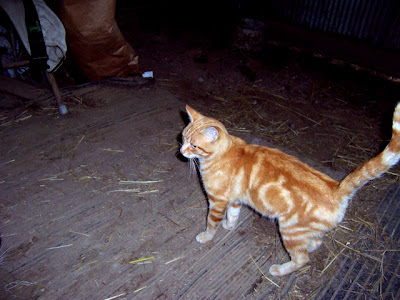 Sunday afternoon, Lee came back from a trail ride carrying this half-grown kitten in her arms. He was found by two other riders along the Caesar's Creek near the bridge under the road. He is very tame and one of them had dismounted and picked him up. They live at the other end of the trail about 5 miles away and were trying to figure out how to get him to their barn when Lee and Zoe [her horse] came along. Lee offered to bring him to her barn (only about half a mile away). Lee names him Moses because he was found along the stream. So now she has another cat and has broken stray cat rules 1, 2, 6, and 7. I think he will adapt to his new home. He gets along with the other cats and they eat together from the communal dish. He is used to dogs and rubs against Baily and Jago just like the other cats do. I'll take him to the vet next week to get his shots and to be neutered.

This isn't the first time that this has happened--stray cats are all too common in the country. Here's another snapshot of Moses, who is mingling quite well with the other barn cats. I agree that the stray cat rules have been seriously breached, but Moses has been saved, and that's what's important. 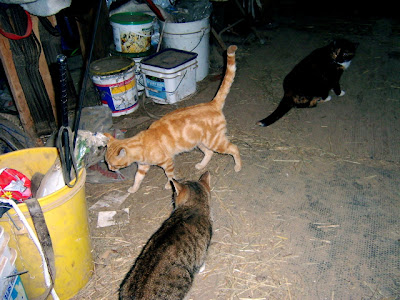 The cat in front is Miss Hissy, and the one in back is Sissy. (Sissy's brother Scamp was not available for this picture.) They'll all be boarding the Friday Ark and frolicking in the Carnival of the Cats, hosted this coming Sunday by the Bad Kitty Cats! 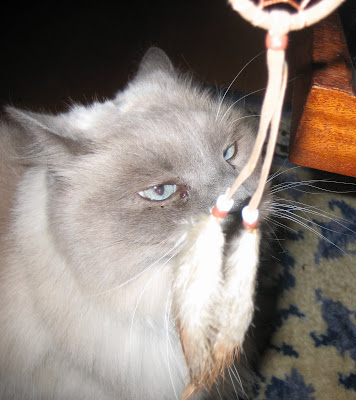 I got a package in the mail. It's a dreamcatcher! The good folks at a local American Indian charity send them out once a year with their request for donation. The last one I received didn't last more than a few minutes. Those feathers were really tasty. I wonder how long this one will survive?

Check out the Modulator's Friday Ark. On Sunday, the Carnival of the Cats will be at Grace and Kittens. 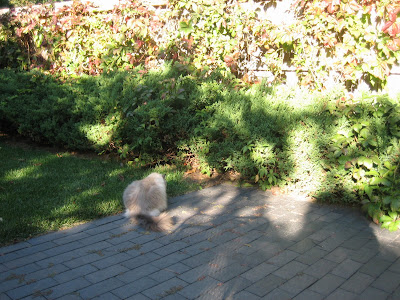 Today's the second anniversary of my blog. Is it the blogoversary or the blogiversary? Both spellings are widely used. While humans might not agree on how to spell it, I'm enjoying the day! I'm getting in a little hunting.

You can get your blogoversary listed at this website: http://www.blogoversary.com/

Purrs to all my catblogging friends!

Dispatches from the tail trash can

A commenter on Aloysius' recent post about tail trash wrote:

But do you get tail trash in a trailer? And
would it be trailer tail trash? And could you
say it five times fast?

Now, being a kind of virtual cat, I don't officially have a tail. But I do have a mind. Offered here, without comment: headlines from the Tail Trashcan:

P.S. The Bad Kitty Cats Festival of Chaos will be at This, That & The Other Thing this weekend. And the unofficial theme is: tails and toes!


Apparently the season opener for "The Office"--a so-called comedy on NBC--included a subplot where one of the characters, Dwight, deliberately kills Angela's cat. How sick can you get?

Mr. Hendrix--a very socially aware cat--has started a campaign to protest this sick plot. I won't recount the details here, but you can find them on Mr. Hendrix blog, along with the addresses of some of the people to complain to, and a list of advertisers.

The cat according to Pablo Neruda 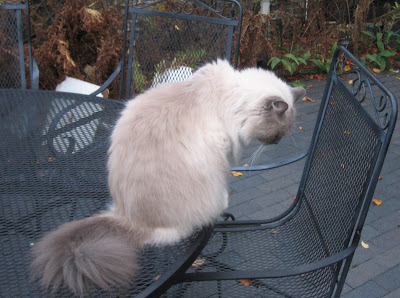 Ode to the Cat, from Voyages and Homecomings, by Pablo Neruda

The animals were imperfect,
long-tailed,
unfortunate in their heads.
Little by little they
put themselves together,
making themselves a landscape,
acquiring spots, grace, flight.
The cat,
only the cat
appeared complete and proud:
he was born completely finished,
walking alone and knowing what he wanted.

Neruda's splendid poem goes on to describe the cat's many attributes: his golden eyes, his air of mystery, the way in which he polices the house. The author professes, finally, that the cat is unknowable. And he says: "everything/is too unclean/for the immaculate foot of the cat."

I'm sure all cats will agree that Neruda knew the essense of the cat. He is a great poet!

Look for the Friday Ark tomorrow and--on Sunday 10/7/2007--the Carnival of the Cats at Stranger Ranger.