Over at Carnival of the Cats, I'm featured this week as a catmodel. And I didn't even have to blow-dry my fur. There's a passel of handsome felines in the Carnival Gallery. Do check it out!

Cats are Democrats? Who knew? 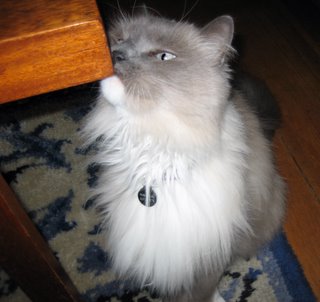 Around my house, the common wisdom has it that cats are Republicans, no doubt because of our territorial instincts. But Kirk Anderson, a cartoonist for Buzzflash.com, says no. "Cats are Democrats. Dogs are Republicans," a vintage Anderson cartoon, is quite persuasive on the matter. A couple of examples should make the point: While dogs love foreign adventures, cats prefer to stay at home. Dogs obsequiously serve the man; cats demand entitlements.


Another reason why cats are much better than dogs. 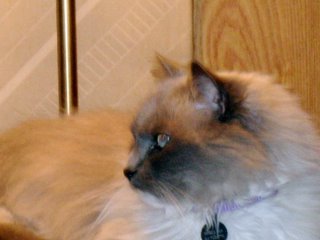 I am dreaming about my auntie, the Great Cat Meme.

A prolific queen, Meme births one litter of Memelets after another, ad infinitum. Who the fathers are, no one knows; it may be that Meme is capable of parthenogenesis.

Among the Great Cats, Meme is a queen not only because of her fecundity, but also because of her ability to inspire humans. Although ancient, my Auntie Meme is remarkably postmodern in her views.

Always up to date, Meme has morphed into a Goddess of the World Wide Web. Nowadays, it seems as though you can’t swing Schrodinger’s cat without hitting a meme or a blogmeme. Many bloggers use “meme” as a synonym for “game.” Clancy at Culture Cat writes about “A Literary Speed Dating Meme.”

Auntie Meme inspires those who’ve commented on Catymology:
I too, have fallen under the spell of Auntie Meme. How else would I have conceived of Catymology, or of the idea that all humans must be catted? My own Memelets are starting to proliferate. Humans and their felines often find my blog after hunting around on the World Wide Web for certain items I have previously dug up. Some recent examples:
Anyone for a game of catch the meme?

*meme (Pronounced 'meem') An idea, thought or piece of information that is passed from generation to generation through imitation and behavioral replication.

I may look like a couch potato, but I'm really a mighty hunter


Who needs horoscopes when you can read your "breed profile" and find out how you are supposed to behave? From what I can tell, cats of the Birman persuasion are said to be all things to all people. 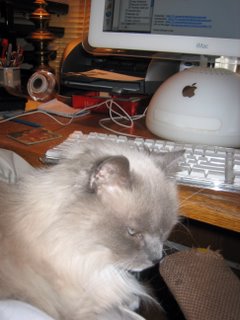 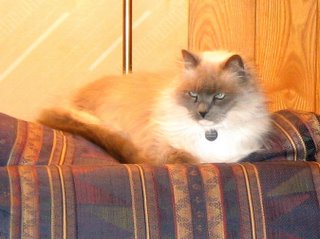 
Birmans "are active and playful, but will also entertain themselves quietly if you are too busy to play with them," according to one online authority.

Another source says: "The Birman . . . is calm, balanced, and neither particularly introvert or extrovert. He is sociable with cats and dogs alike. He loves the company of children, and delights in playing with them. He does, however, also appreciate moments of peace and tranquility. Males are even more affectionate. The Birman can be a little possessive of his owner, doesn't like being ignored or left alone for long. In fact, he will quickly get bored and then become indifferent to his owner and family. He is soft-spoken. He does enjoy the outdoors, is a good hunter and loves a good workout. The Birman is extremely smart."

Exactly. I'd really rather be out in the garden. 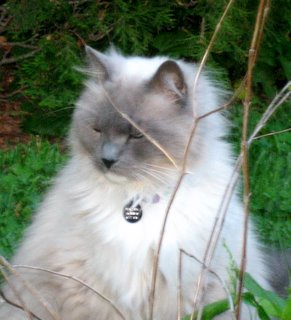 Update: Given the recent controversy over "lies" in memoirs, I need to make it clear that I don't actually know whether I am a Birman or not. I don't have any papers. But I sure do look like those high-end Birmans that you can see all over the Web. Truth, as any good surrealist knows, is fungible.

The more you talk to cats...
the smarter they become.
An occasional 'nice kitty'
will have no measurable effect;
intelligent conversation is required.

Into the litterbox: a catted tale 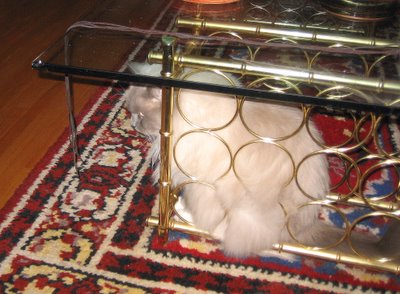 Consider the word "catted," which--when I use it--means "possessed by a cat." That's if you're a materialist. (Most members of my species are.) But if you're an idealist, like amanuensis, to be catted means "to be obsessed by a cat."

When used by other humans, "catted" can have a variety of meanings, not all of them so benign.


“The Catted Anarchist” is one of the Fantastic Fables by Ambrose Bierce.

An Anarchist Orator who had been struck in the face with a Dead Cat by some Respector of Law to him unknown, had the Dead Cat arrested and taken before a Magistrate.

"Why do you appeal to the law?" said the Magistrate - "You who go in for the abolition of law."

"That," replied the Anarchist, who was not without a certain hardness of head, "that is none of your business; I am not bound to be consistent. You sit here to do justice between me and this Dead Cat."

"Very well," said the Magistrate, putting on the black cap and a solemn look; "as the accused makes no defence, and is undoubtedly guilty, I sentence her to be eaten by the public executioner; and as that position happens to be vacant, I appoint you to it, without bonds."

One of the most delighted spectators at the execution was the anonymous Respector of Law who had flung the condemned.

While there’s a certain sense of justice in the judge’s sentence, this fable made me want to cat:

2. Eject the contents of the stomach through the mouth 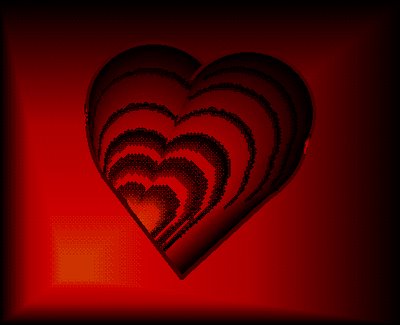 Hunting around for books that will help fill out Aloysius' research for Catymology just got easier. Minnesota has created a service that is really going to help. It's called MnLINK Gateway.

Aloysius thinks it's the best thing since sliced mousie paws.

Any Minnesota citizen with a computer and a library card can log in and borrow books from almost any library in the state. Now I can forget about that lengthy and expensive "Wish List" that Aloysius has been piling up on Amazon.com. Almost everything he wants me to read for him is available through MnLINK.

Don't you just love your tax dollars at work? Now, if they'd only give library cards to cats....

A big day for catymology 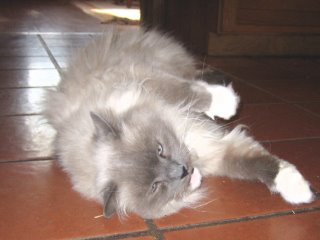 Frisky, the intrepid feline citizen journalist at Catcall, has posted his interview with me. I'm falling over!

Of monks and their cats 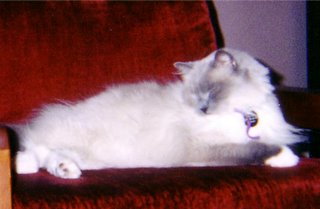 What is it about monks and cats? As I’ve already mentioned, my esteemed namesake Pangur Ban, hero of the Gaelic poem, kept a monk as his catted one. Birman cats, it is said, originated in a Buddhist temple.

Still intrigued by Haruki Murakami’s magical cats, I began hunting around for more felines in Buddhist tradition. Before long, I sniffed out Dharma the Cat, a comic strip about a wise cat whose job it is to lead a novice monk, Bodhi, on the path to enlightenment. Dharma is there--along with the wily mouse Siam--to teach Bodhi by example. In Episode 1, “Time,” Dharma demands to be fed early, and Bodhi learns that “time is an illusion.”

One helpful feature of Dharma's web site is that each cartoon comes with extensive commentaries from practitioners of Buddhism, Hinduism, Christianity, Islam, and Wicca--among others. Just about the only religion that isn't represented is my own: catymology, which I have defined as a philosophy or cult whose followers invoke the principles of catymology in order to claim the deity of individual, or in some cases all, cats. Verb: catymologize. To convert to catymology. “In his efforts to achieve cult status, Aloysius catymologized over five hundred humans.”

Catymology does have much in common with Buddhism: felines are naturally adept at living in the moment. That makes us perfect, in my humble opinion.

A really big bed cat for my upcoming birthday 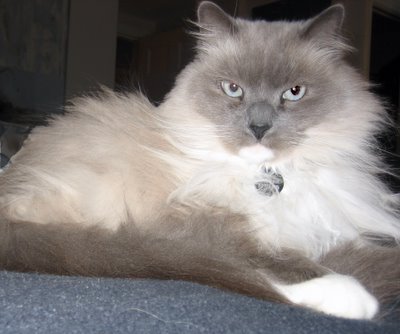 Got bed cats? What ailurophile doesn't need another bed cat? Now, check out this drawing of a really big bed cat in the January 23 New Yorker cover by Gahan Wilson. This lucky feline is all tucked in, surrounded by his humans. Aw, shucks!

You can put it on my wish list for Valentine's Day. If the price ($295 for a large framed print) seems high for Valentine's Day, what about for my upcoming birthday? Don't know when my birthday is? I think I'm going to have to look it up myself.

Let's see: James Augustine Aloysius Joyce was born on February 2, 1882. Since that great language hunter shares my name, I'd adopt his birthday as my own--except for the fact that (amanuensis says) February 2 was last week. All cats know that birthdays are movable. So perhaps this is February 2 after all.

But wait: T.S. Eliot, author of the immortal Old Possum's Book of Practical Cats, was born on September 26, 1888. That's an idea.

Or how about this:

Saint Aloysius Gonzaga was born in Castiglione della Stiviere on the 9th of March 1568 in the region of Mantua in Northern Italy and was the first-born son of the reigning Marquis Ferdinand Gonzaga. . . . And the 21st of June is his feast day.

Although I'm not very religious, I think that March 9 would be an excellent day to celebrate my birthday. Meanwhile, I think I'll lie down again and concatenate some naps.

Laurence Simon has started a catblog as part of the Houston Chronicle's citizen journalism project. More tasty goodness for feline kind can be found there every day. Laurence writes:

Of our three cats, Frisky sees himself as a budding feline citizen journalist..." 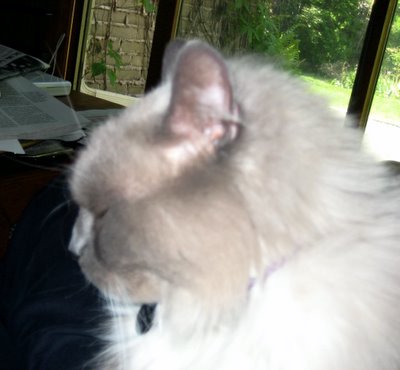 A Japanese cat named Toro says that cats know everything. Toro's name is drawn from the word for the fatty belly flesh of a tuna. Toro is one of my favorites!

Not only is Toro's namesake tasty, but Toro himself is exceedingly wise. But I'll bet you knew that already, didn't you? You knew that as soon as Toro said "Cats know everything."

Toro is a supporting character in a very peculiar book that amanuensis has been reading: Kafka on the Shore, by Haruki Murakami. There is much about cats in this surreal tale. A human named Nakata, for example, is one of the few members of his species who can actually talk to cats. Nakata uses his gift to find lost cats. Nakata is blessed among the catted.

Some cats communicate better than others, of course. The cat Kawamura, who attempts to hold a conversation with Nakata early in the book, sounds as though he's speaking through one of those random text generators that I've mentioned before. Come to think of it, though, he does have a few choice bits about tuna.

If any of you know of some legends about cats from Japan, I would be glad to hear from you.