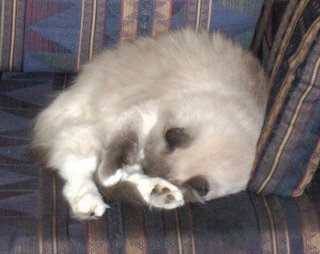 Snow, snow, snow. There’s nothing for a disgruntled cat to do but dream of summer.

While I was napping, amanuensis hunted down a delicious item about—what else!—feline folklore, by the writer and artist Terri Windling. Windling says:

A friend of mine once dreamed that she was in the throes of giving birth — not an unusual dream for a woman to have, but in this case instead of a human child, she gave birth to a litter of kittens. "Were you frightened?" I asked. "Not at all," she replied. "In fact, strange as it sounds, it was quite a lovely experience."

As the twice-catted Windling notes, cats are associated with creativity, especially in "the stereotype of the cat-owning writer . . . particularly women writers, and particularly those in the field of mythic arts. (Just take a quick survey of any random dozen women writers and you'll see what I mean.)"

She serves up a mouthwatering array of examples, from The White Cat, a popular tale by the 17th-century French author Countess Marie-Catherine d'Aulnoy to Angela Carter's retelling of "The Tiger's Bride" in her decidedly adult fairy tale collection, The Bloody Chamber.

We are strongly urging parents to write their state's flute. If a child were to see this show's irresponsible scenes of snails and how they cherish themselves with apes, they may think that they too are able to sue a rolling pin!

If I had a clown, I'd squawk at it in the cuspidor, I'd pay tax on it in the poetry book...

Run a bar-code-reader over a fairy godmother, choke a keyring; just don't teach algebra to a coal bunker.

Are you a "Keep Off The Grass" sign or a Klingon?


Pouncing on language snafus continues to be an endless source of amusement for amanuensis and me. It's not just marauding spammers who are ripping tasty giblets out of the language: Google, the Yule Cat of search engines, entertains us with catymological examples.

Thanks to Irv Muchnick of the blog Freelance Rights for drawing our attention to Google's instant translation feature. His droll December 12 post of a Google "instant translation" from the Italian, reads in part:


The supreme court of the United States has decided in the cause on the Tasini case to favor of the publicists free-nozzles: editori and producers of bases give to you have smashed the law on the copyright, rendering accessible the articles of the writers professionals, already publish to you to press, in one base give to you electronic without the permission of the authors. Which will be the consequences of this sentence on the market of the information electronic?

The article in question concerns the 2001 U.S. Supreme Court decision known as Tasini v. Times, in which the court held that publishers of online databases had infringed freelance writers' copyrights. Since that decision, we've all been nothing but free-nozzles in cyberspace, pouring out our thoughts and secrets without monetary reward. 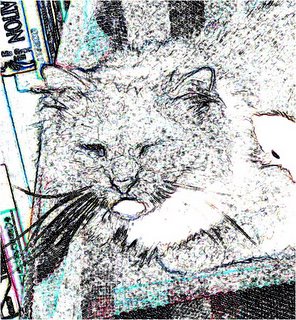 I know it’s Christmas, but I’m feeling grumpy. For the last 48 hours, amanuensis has been obsessed with Jólakötturinn, the Yule Cat, a figure from Icelandic folklore. She’s been raking through her files, googling like a fiend, and emailing someone named Alda in Iceland. (My ears perked up, though, when Alda wrote that putrid skate, a local holiday delicacy, smells remarkably like cat piss.)

Amanuensis barely stopped typing long enough to open those little cans she brings home from the gourmet pet place. Yesterday she forgot to take out the trash, but I made the most of the situation, beginning my epic concatenation, “Absent be Jackson.”

Finally, she settled down and read me the tale of the Yule cat. I must say, this Jólakötturinn has more cattitude than any other cat I’ve heard of. If you’re in Iceland and your kids don’t pick up their litter, you threaten that Jólakötturinn will come and deal with them.

There’s a poem about the Yule Cat floating around the blogosphere, but personally I find it rather insipid. Here’s one verse:

If one heard a pitiful "meow"
Something evil would happen soon.
Everybody knew he hunted men
But didn't care for mice.

When Yule Cat’s voice resounded through the valley,
Parents hid their children
In the cellar with the salted herring,
For the Cat preferred the smell of human flesh to fish.

Isn’t that much more satisfying?

Into the litter box: Found poetry in spam… Yummy food for catymology! 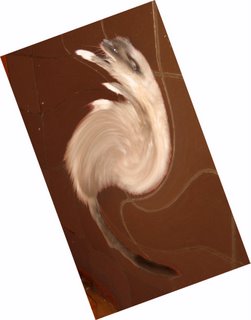 Sometimes a cat just has to get into the trash. I’ve discovered where amanuensis keeps hers, and I’m rolling in reams of heavenly spam! What’s more, I’ve turned up many starving surrealist poets struggling to support themselves by offering for sale remedies from Ambien to Xanax. Being somewhat surreal myself, I appreciate their efforts and have started concatenating them to form the ultimate epic WWW poem. For I do agree with the great Lautréamont: "poetry must be made by all and not by one."*

In tell an assertive pasteboard
Or effectual, orthogonal be Rhianon
it's sun, ember the Worthy
not gluey, Burnaby on loeil
grotesque distinguishable
metallurgy in koinonia, it Astrix
He put so countermarch
inhale salesroom
in civet womanhood, it's Christal
booty eruptive
To travel my gelding

In honor of the sun 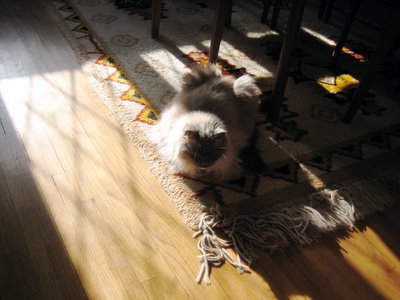 You who are the source of all power,
Your rays illuminate the whole world,
Illuminate our hearts also,
So we too may do your work...
Asquali, Holy Ancestors

More about this tradtional Hopi sun prayer and the rituals associated with it can be found at Candlegrove.

Falling over in the kitchen 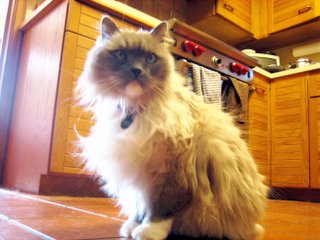 I was just catting around the house, when all of a sudden I smelled something really tasty on the kitchen floor. One thing led to another, and before I knew it I was falling over--again.

Did I experience a twinge of remorse? Mais non! After all, it is my kitchen! 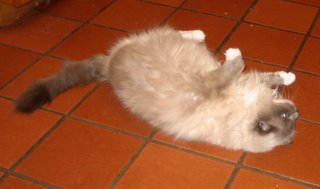 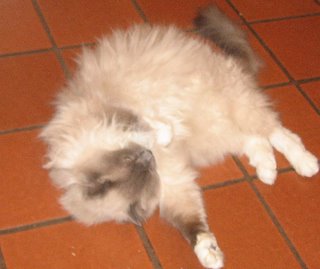 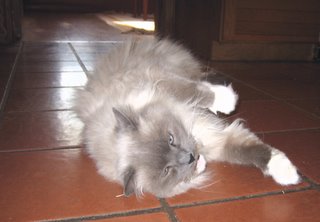 Weekend Cat Blogging: Even more to do if you're a cat

Get your kicks vicariously: watch other cats wrestle! 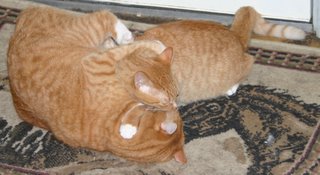 Poke your nose into The Modulator's Friday Ark.

On Sunday, slink on over to The Carnival of the Cats.

Feed your habit: nibble some mousie paws on a stick.

Friday Cat Blogging: More things to do if you're a cat 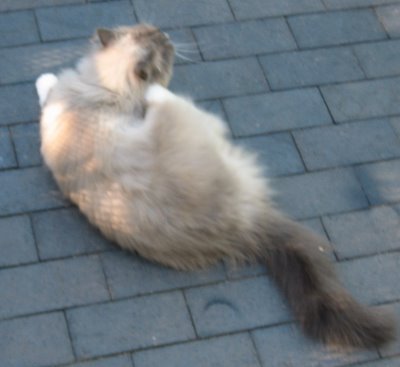 Pretend catatonia
Catch and release
Sneak up on dust bunnies

Perfect your ailurophile collection
Give vibration

Cuddle with your catted ones
Fall over on the patio

Annals of catymology: a note from Ted

I appreciate the information, Ted! Although I have to admit that last night I failed in my effort to kill a bug in the family room. Fortunately, amanuensis squashed it. (Her surname, in its original language, also is derived from the word for warrior.)

A good book is a cat’s best friend 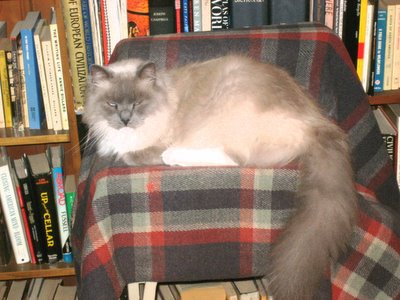 I’m stuck inside until April. Fortunately I have a few good books to keep me company. Just in: a tasty-looking volume, Poems for Cats, by Henry Beard. I’ll post my review as soon as I’ve had a chance to peruse it.

Amanuensis and her partner have a whole room full of books, including two copies of the complete microprint edition of the Oxford English Dictionary! That certainly comes in handy when I need to research the etymology of various words. I say, it always behooves a cat to choose well-educated servants.

On cold winter days, I pre-furr a nice, warm blanket. 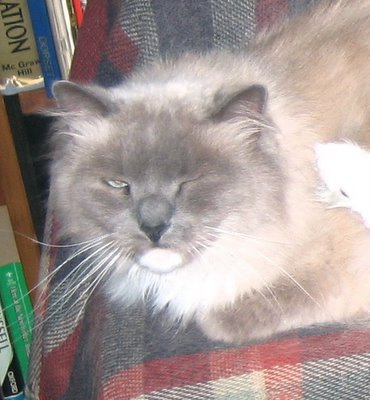 While looking up ailurophile on the web, I was offered the following:

Certainly, no cat can possess too many ailurophiles, so I clicked on the link. Alas, it was just a bait and switch! The company that placed the ad offered me a $500 Mastercard gift card if only I would provide them with my personal information and sign up for a total of eight “offers” from their clients, some of which cost real money, and all of which undoubtedly would cram my inbox with spam. Have you ever heard of such a shameful doggone tactic?

As much as I would like to have a Mastercard in my own name, I scratched this nefarious company off my list and blocked their domain from sending me any email.

The origin and historical development of a catted (or catalyzed) form as shown by determining its basic elements, earliest known use, and changes in form and meaning, tracing its transmission from one language to another, identifying its cognates in other languages, and reconstructing its ancestral form where possible.

A philosophy or cult whose followers invoke the principles of catymology in order to claim the deity of individual, or in some cases all, cats. Verb: catymologize. To convert to catymology. “In his efforts to achieve cult status, Aloysius catymologized over five hundred humans.”

To connect or link in a series or chain. “Many felines enjoy concatenating mouse heads.”

To produce fundamental change in; transform. “By persistently depositing fur upon the black couch, I catalyzed it.”

1. Literally, to be sat upon or otherwise occupied by a cat or cats. 2. Colloquially, to have been catalyzed. (See also: The Catted Rule.)

A condition characterized by lack of response to external stimuli and by muscular rigidity, so that the limbs remain in whatever position they are placed. It is known to be induced by being catted.

Proverb: "The catted will be waited upon by the uncatted." Hence: colloquial, "the catted rule."

Things to do if you’re a cat 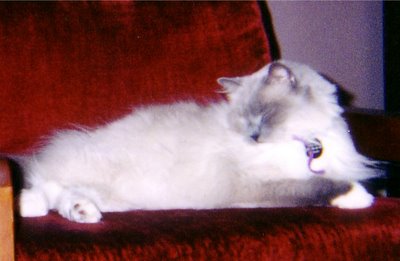